After the post-harvest and the leaf fall of the fruit trees, a period begins from which we can prune our fruit trees.

Through pruning we will regulate the fruiting and vegetative growth of the tree and, therefore, we will help to achieve a quality fruit. In other words, with pruning we are going to control the load of the tree in terms of buds, or what is the same, the potential number of fruits that could set in the next biological cycle. For example, poor pruning would mean a high number of small fruits that the tree will not be able to mature properly; on the contrary, a severe or excessive pruning would lead to a low production.

In general, the best time to prune fruit trees is winter, although with certain caveats:

There are different pruning tools, which in any case must be adapted to the diameter of the branch to be cut, allowing a clean cut without sprains. After use, they must be cleaned and disinfected, it is even convenient to carry out this disinfection periodically during the pruning day to prevent the proliferation of wood diseases from one plant to another. 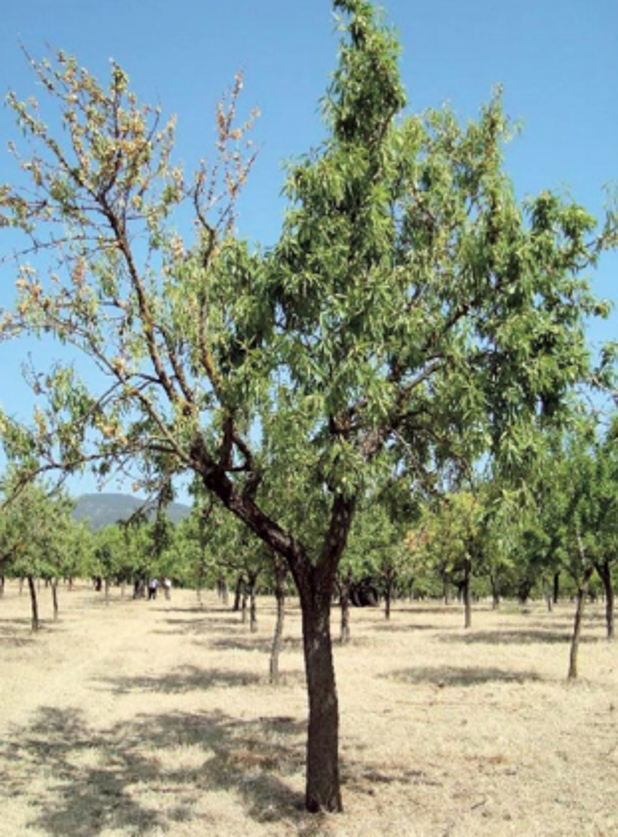 Initial external symptoms associated with pathogenic fungi of almond wood. Leaf chlorosis, decay and wilting are seen in some of the main branches (Olmo et al., 2017)

There are several wood diseases that affect fruit trees. Due to the organs they infect, these types of pathologies have specific characteristics of development, dispersal and control that are different from foliar diseases, those of the fruits or those of the neck and root.

Wood diseases are the consequence of the attack of a group of fungi that are present in the environment and that, taking advantage of entry holes such as wounds or pruning cuts, colonize the wood, causing various symptoms such as discoloration and necrosis of the vascular tissue, leaf spots or chlorosis with characteristic patterns, delayed budding and death of buds, flower abortions, decreased productivity and even tree death.

Unlike other fungal diseases such as foliar diseases, wood diseases do not show visual symptoms in the plant during the first stages of infection, which allows the progress of the disease as there are no obvious signs that alert the farmer to apply measures. cultural or chemical treatments for its control.

Currently there are no curative products for wood diseases, so the most effective means of control is prevention. Among the recommended preventive measures are:

In reference to this last preventive measure, from the Technical Department of Cultifort we recommend CULTISANO Cu. It is a formulation based on copper chelated with EDTA and chitosan.

Chitosan is a natural aminopolysaccharide polymer derived from chitin and a precursor of chitinases and glucanases. This type of protein, known as “pathogenesis-related proteins” (PR proteins), are produced by plants after the attack of some pathogen. They are synthesized after the activation of the Acquired Systemic Resistance (SAR) mechanism, which is one of the self-defense mechanisms of plants. These PR proteins have antimicrobial capacity, attacking the cell wall of bacteria and fungi.

The treatments with CULTISANO Cu provide two fronts of action:

In this way, the tree is protected by the double action of CULTISANO Cu, efficiently preventing the attack of fungi and bacteria, avoiding the problem before its appearance.

CULTISANO Cu is a biodegradable, non-toxic, bioactive product, without a safety period and certified for use as an input in Organic Agriculture.