Alternatives for phasing out controversial inputs in agriculture

Alternatives for phasing out controversial inputs in agriculture

As part of our innovative R&D line of Natural Defensive Biotechnology, we have developed an initiative focused on finding alternatives to some of the controversial inputs allowed in both conventional and organic agriculture for pest and disease control, including copper, mineral oil and sulfur-based fungicides.

Cultifort offers a series of alternative and/or complementary products to replace or reduce the treatments based on formulations with copper, mineral oils, sulphur, or their derivatives, in the control of plagues and diseases, both in woody crops and arable crops, as well as in horticulture. 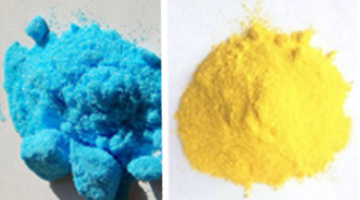 The proposed alternatives should not be seen as mere substitutes for one input by another, but will be incorporated into wider integrated strategies. In general, the health of the crop will be based on preventive and indirect management measures, preferable to the use of inputs from external sources. The choice of varieties adapted to local conditions, plant resistances, the alternation of active materials, crop rotations, the promotion of biodiversity and other cultural practices that ensure a resilient agro-ecosystem will contribute greatly to reducing dependence on external inputs.

The control of pathogens (including certain pests) that affect and cause damage to plant tissues in the aerial part of plants, is carried out mainly by regular spraying with products formulated with copper, mineral oils and sulphur.

The harmful effects of copper on microbial communities and other soil fauna (through drift) have led to EU regulatory restrictions on its use. The use of copper for phytosanitary purposes has been authorized in the EU up to 6 kg/ha/year of Cu metal until the end of 2018, decreasing to 4 kg/ha/year since January 2019. According to the information obtained through consultations, interviews with experienced technicians and farmers, the limitation to 4 kg/ha/year seems to be acceptable for most of them, except for exceptional cases where certain endemic pests and diseases require exhaustive and continuous control due to the fact that the soil-climatic conditions favour a higher incidence.

Numerous alternative compounds are being developed to reduce or replace cupric inputs, but their use is little implemented. 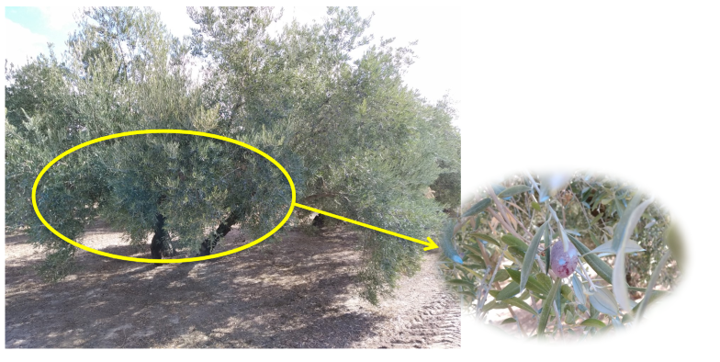 WHAT ARE THE ALTERNATIVES TO CONTROVERSIAL INPUTS IN AGRICULTURE?

Mineral oils are applied for the control of insects and mites. Their use ranges from 30-90 litres/ha/year. Their broad action effect makes the oils more versatile than other alternatives, which include

The applied quantities of sulphur in the agriculture of the Mediterranean basin range from 15-20 kg/ha/year. There are no known alternatives currently in use.

WHAT PRODUCTS DOES CULTIFORT OFFER AS ALTERNATIVES TO CONTROVERSIAL INPUTS?

In CUVIOL PLUS, copper has been associated with lignosulfonates and polysaccharides for the prevention of cryptogamic diseases. It produces an increase in the self-defence of the plants as well as providing the antifungal and antibacterial action of copper. The characteristics of its formulation help to stimulate plant development and correct the lack of copper in sensitive species. It is a stable product that is easily assimilated by the plant.

Its use is recommended in citrus fruits (especially in the satsuma group for being sensitive to this deficiency), in arable crops, fruit trees, vegetables, olive trees and vines, both by foliar and root, and applied throughout the growing cycle, especially at times when weather conditions are favorable to the development of diseases caused by fungi and bacteria. 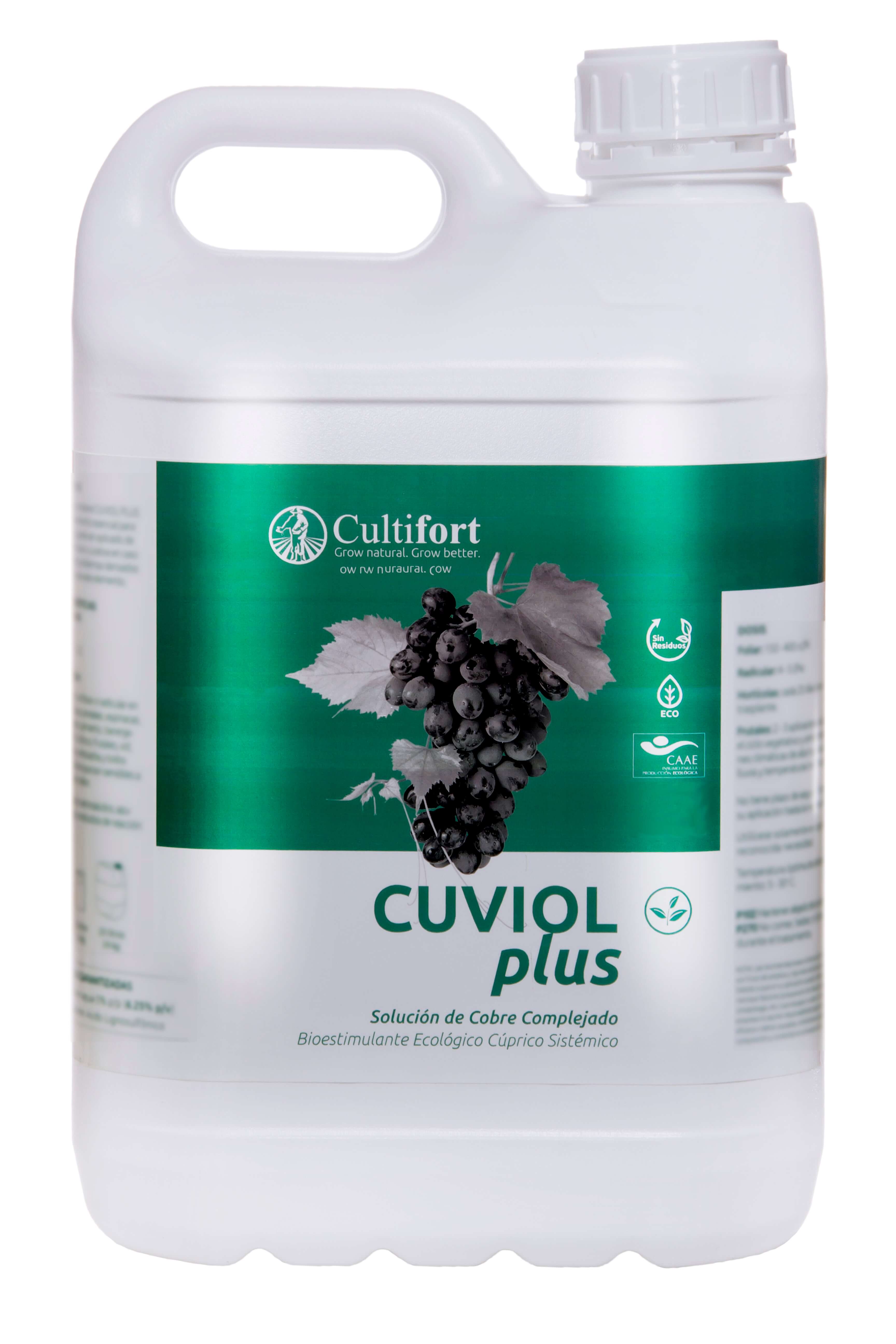 FOLIQUINO is a formula based on aluminium lignosulphonate, coming from lignosulphonic acid, a complexing agent of natural origin, composed of a low molecular weight polymer, which provides a high capacity of penetration and translocation in the plant, both through the leaves and the roots, with an ascending and descending system. It introduces aluminium salts into the plant and favours the synthesis of natural compounds that improve the defence against certain fungal and bacterial pathogens in roots, trunks, branches, leaves and fruits. It also notably improves the circulation of sap, enhancing the effect of any product with which it is mixed (synergy).

Thanks to its formulation, it stimulates plant development with the introduction of manganese and zinc, essential microelements directly related to growth. 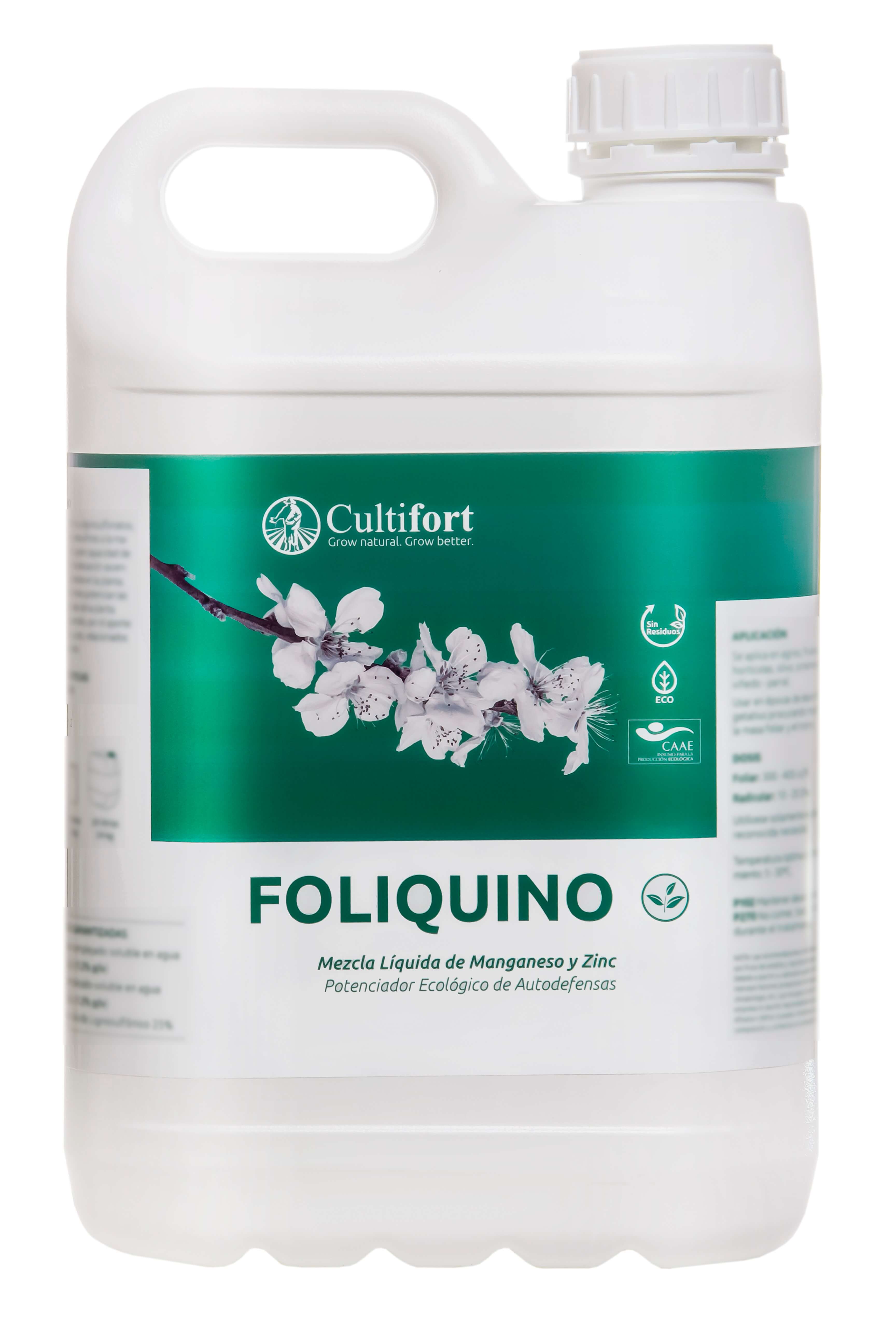 SPIRALIS ECO LONG LIFE is a fertilizer solution containing manganese and zinc in ecological chelated form, together with a complex of selected organic acids and peptides, related to green and red algae, which facilitate their assimilation by the plant and enhance their bioprotective effect against various abiotic stress factors.

SPIRALIS ECO LONG LIFE promotes the induction and facilitates the mobilization of precursors, which are stored in vacuoles and plastides, of the natural defenses of plants, thus enhancing the synthesis of endogenous molecules, with high defensive capacity and systemic. The synthesized endogenous defensive molecules induce structural changes in the cell walls of the plants at the level of their lignification, thus constituting a physical barrier against abiotic stress.

From a nutritional point of view, it stimulates the development of plants, delays their senescence and prolongs their productive life. It also has a bio-protective function by activating the plants’ self-defence mechanisms against certain fungi and bacteria.

Its preventive action has been demonstrated by inhibiting the growth of mycelium and sporulation in various types of fungi, such as Alternaria spp., Botrytis cinerea, Colletotrichum gloesporoides, Fusarium oxysporum, Rhizopus stolonifer and Penicillium spp. and in bacteria of the genus Pseudomonas, Plectobacterium and Xanthomonas, among others.

It is biodegradable, non-toxic and bioactive. It strengthens the root system, improves rooting and increases the plant’s resistance to infection by certain pathogens. 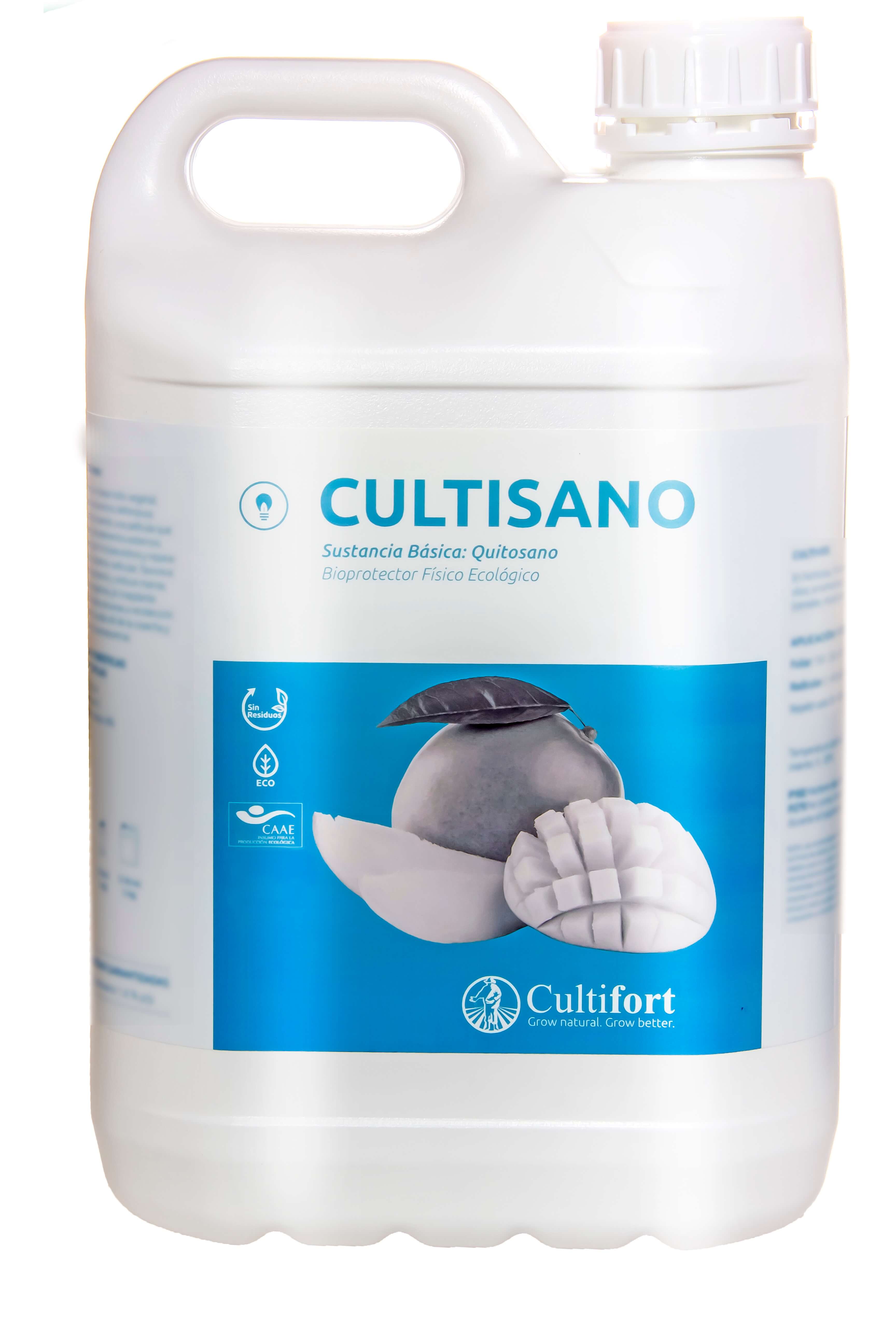 CULTISANO Cu is a liquid combination of copper EDTA chelate with chitosan. This formula takes advantage of the synergy between the protective power of copper and the improvement of antifungal and antibacterial defenses induced by chitosan, so that it provides two action fronts:

In this way, the culture is protected by the double action of CULTISANO Cu, efficiently preventing the attack of fungi and bacteria and avoiding the problem before its appearance. 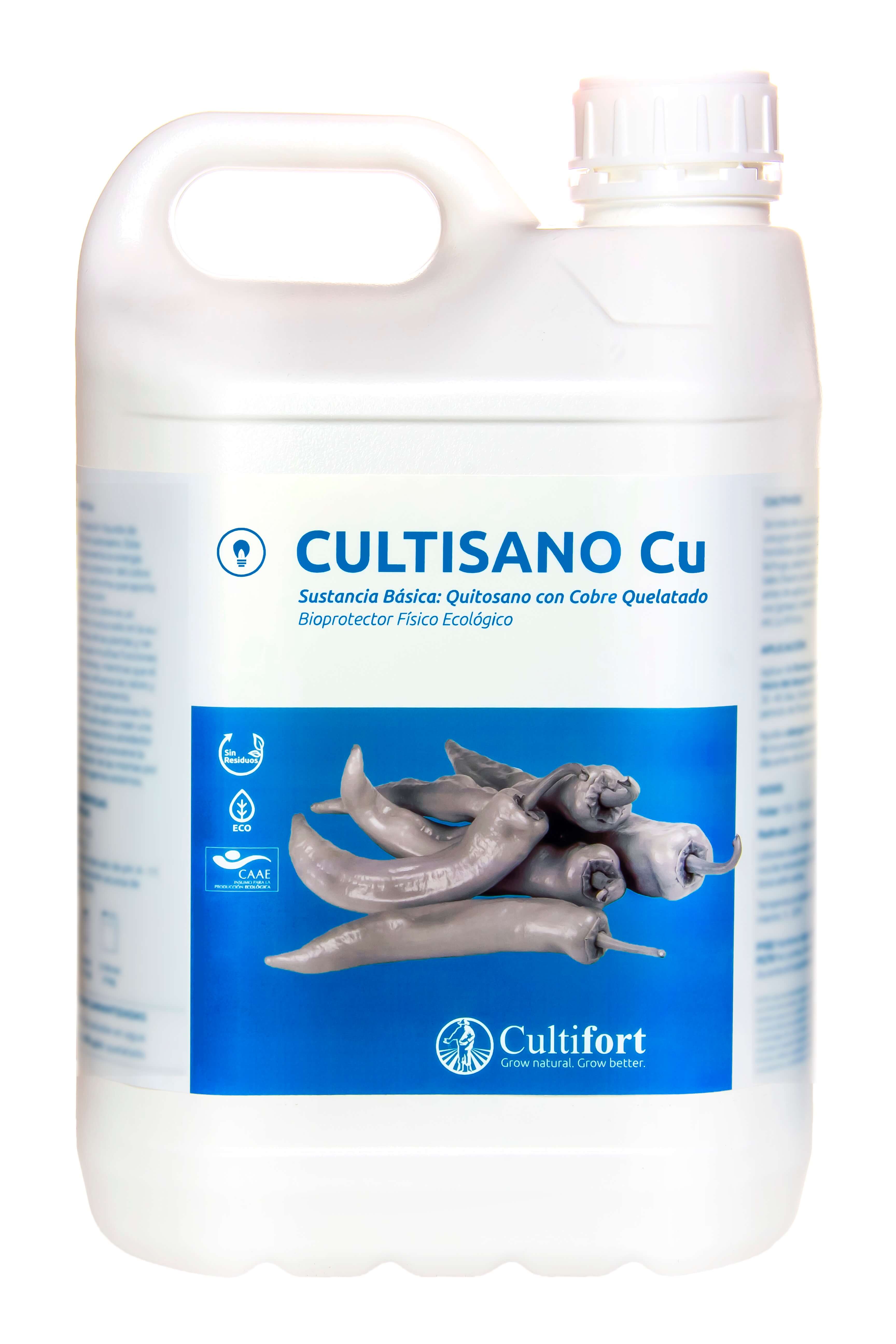 CULTISILK is a potassium solution with silicon and amino acids, for foliar and root application. As a source of potassium and silicon, it improves the growth of the plant and reinforces its resistance to environmental factors by boosting the plant’s defences. Silicon is a structural element that reinforces the cell wall, strengthening the physical support of the plant and protecting it from attack by external agents.

In addition, it has synergies with calcium, magnesium and potassium, improving their absorption and transport in the plant. It is especially indicated to prevent the bedding of cereals, fungal diseases in all types of plants, attacks by sucking insects and general improvement of the mechanical capacities to resist wind, rain and other types of physical and chemical stress (salinity and water stress, among others).

Among the main benefits are