How to get a high-quality early harvest EVOO?

How to get a high-quality early harvest EVOO?

Historically, since the Phoenicians, the olive harvest was carried out in the months of December and January, when the fruit offered the highest fat yield. We have come a long way since then and numerous studies carried out in recent years show that if the olives are harvested early, the juice that is extracted is of higher quality. The organoleptic properties and physicochemical characteristics of these extra virgin olive oils (EVOO) reach their maximum expression. 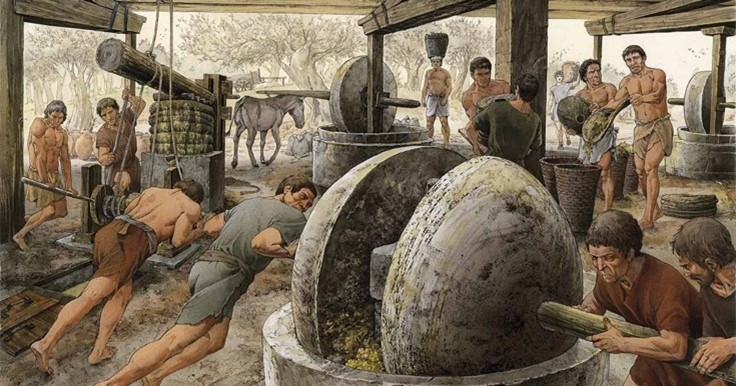 The size of the fruit is a critical factor for the quality of the olive. The pulp / stone ratio is related to the size of the fruit, which is a determining factor of the fat yield since the oil from the pulp represents more than 95% of the total olive.

Olive growth goes through several phases. In a first phase of 7-9 weeks after flowering, there is a significant increase in the size of the fruit. After the hardening of the stone, the growth of the fruit stops or slows down during the central weeks of summer (phase 2), to reactivate in a third phase in which the fruit will continue to increase in size until its veraison or change of color towards yellowish green and purplish tones, indicative of the beginning of ripening.

This third phase usually occurs approximately from the beginning of September to mid-November, depending on the area and the variety, and is characterized by rapid fruit growth. During this phase, the oil biosynthesis begins to occur and its accumulation in the olive pulp. The availability of water during this period determines the final size of the fruit and its oil content, leading to smaller fruits and lower fat content under stress conditions (see how to prevent this effect by clicking here).

After this last phase, the growth of the fruit and the accumulation of oil are significantly reduced and the ripening processes are carried out. It is important, therefore, to try to achieve a good size of the fruit, carrying out practices to promote its growth, among which, in addition to irrigation, good fertilization is included.

Once the pulp reaches the final size, it may show weight fluctuations as a consequence of fluctuations in its humidity due to environmental conditions – mainly rainfall – but not to its oil content. 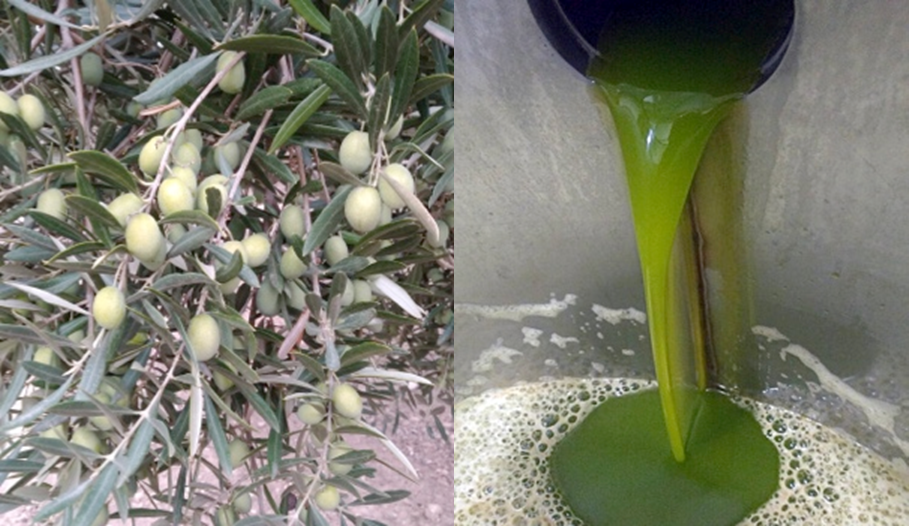 At this point, with the olive at a good level of maturity and still green in color, before it passes to a veraison state and finally to its tonality. Black chromatic, the early harvesting of the olive fruit takes place in October and November. More and more oil mills, industries and cooperatives are launching into early harvest with the aim of producing olive juices, extra virgin olive oils with brilliant greenness, intense aroma, balanced attributes and complex, powerful and flavourful. very fruity.

This advance in the harvesting is a differentiating plus for many producing areas, managing to produce high-end EVOOs, due to their complexity, differentiated organoleptic characteristics and because they are healthier. The production of these juices is limited to the production of a premium range of EVOO, followed by more mature oils to finally generalize the olive harvest.

But premium oils are not made with the simple harvest of the olives in an early harvest, but involve a careful production process throughout the chain, from the selection of the plots with the best fruits, good harvesting and transportation practices, as well as the final milling and extraction in the best conditions. 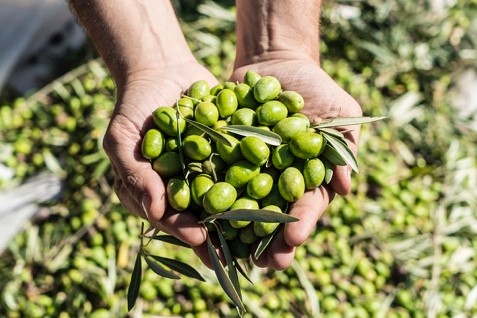 According to Brígida Jiménez, the researcher and disseminator of the Agrarian, Fisheries and Food Research and Training Institute (IFAPA) of the Junta de Andalucía, early harvest EVOOs are made from olives harvested at the optimum harvest time, because that is when its juice offers the maximum complexity of aromas and flavor. 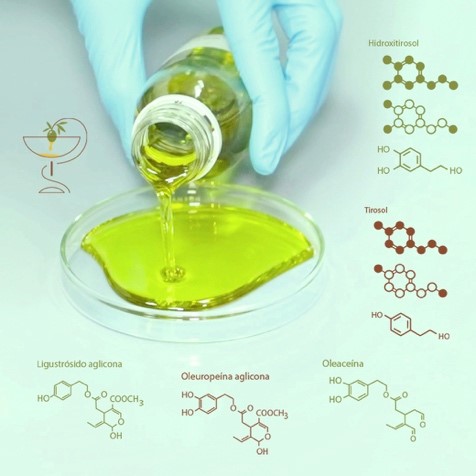 This Doctor of Pharmacy, an expert in oils and fats, highlights that when harvesting in the months of October and November, when the fruit is still green or beginning its veraison, the chlorophyll content is higher, imposing itself on the carotenoids and fixing the green color. of this type of EVOOs, although the color of the oils depends on factors such as the climate or the type of olive and does not determine the quality of the product. It contains much more vitamin A, D and E and polyphenols, which are natural antioxidants and anti-inflammatories, which is why these early harvest juices are considered the best from a nutritional point of view. Specifically, oleuropein, a polyphenol present exclusively in olive oil, is responsible for the bitter taste of these juices and oleocanthal, a powerful anti-inflammatory, is responsible for the itching. Oleic acid and monounsaturated fats are also beneficial, which among other values ​​improve the absorption of nutrients by the body and increase defenses and lower cholesterol and triglycerides.

As we have mentioned, the collection and production process is much more careful and requires many hours of work and specialization, so the price of these EVOOs is more expensive, even more than double. The yield of the olives themselves also has a very important influence here. To obtain a liter of this type of premium oil, between 7 and 8 kg of olives are required (12 – 14% of yield), while 4 or 5 kg (20 – 25% of yield) are enough for an extra virgin of normal harvest. Then it is very important to get the highest possible fat yield when it comes to early harvest. 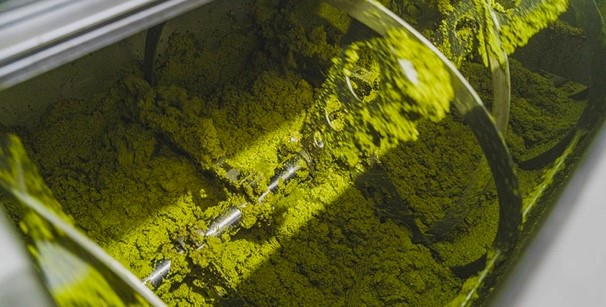 In a test carried out by the Cultifort R&D Department with Spiralis Long Life applications during the 2019/2020 and 2020/2021 campaigns, values ​​of total fat yield and yields of fat over dry matter were higher than other products used.

The trial started initially to evaluate the effect of Spiralis Long Life in reducing the incidence of Repilo in olive cultivation. Said test was carried out in a 30-year-old Picual olive grove farm, in dry land, with a 7 x 7 plantation frame and located in the municipality of Baena, in Córdoba.

The following treatments were evaluated (Table 1):

SPIRALIS Long Life is a liquid formulation of phosphopotassium fertilizer that contains a complex of peptides and selected special organic acids, related to microalgae. It is based on a state-of-the-art Technological Innovation to induce and enhance a local and systemic endogenous increase of molecules with high defensive capacity (thionins, phytoalexins, PR proteins, etc.), thus stimulating the resistance of the plant against fungi, bacteria and other pathogens and enhancing the bioprotective effect against various abiotic stress factors. It also contains a high concentration of potassium, an essential nutrient for the growth and development of fruits.

The latest generation formulation with molecules highly compatible with plant tissues allows their total and immediate absorption (between 1 and 8 hours) and offers a protective effect that can last several weeks.

Visual evaluations were carried out during the two hoods, before each application. The degree of incidence of “Repilo” on the trees evaluated during the year 2019 was not decisive due to the fact that the climatic conditions for the development of the disease were not optimal. However, during the year 2020 the conditions have been conducive to assessing the incidence of the disease, resulting in having the same severity for treatments 1 and 2 and following the same template: incipient during the first months of spring, visually important at the end of spring – beginning of summer and, being invaluable during autumn. On the contrary, Treatment 3 hardly shows a Percentage of appreciable incidence in any of the visual evaluations carried out (Figure 1).

Two weeks after the last applied treatment (autumn), both in 2019 and 2020, a foliar sampling was carried out to determine the incidence of dormant Repilo, by means of the “soda test”, since at a visual level there were no obvious symptoms of the disease (Figure 2). In 2019, only percentage variations were found between treatments (3-5%), which corresponded to the degree of incidence evaluated visually. In 2020, the treatment with systemic fungicide showed 9% of leaves with the presence of dormant Repilo, while in the treatment with 52% copper oxychloride, 17.5% were detected; In the leaves treated with Spiralis Long Life, the presence of incubated Repilo was 12%, however no statistically significant differences were found between the three treatments.

During the first fortnight of November 2020, when the first olives began to age, a sample was taken to determine the possible differences in terms of physical-chemical production parameters and fruit quality. No differences were found at the productive level in terms of fruit size and weight (Figure 3). The moisture content and total dry matter were also similar in the three treatments evaluated. However, the total fat content and the percentage of fat over dry matter were higher in treatments 1 and 2 compared to treatment 3 (Figure 4). Statistically significant differences were also found in acidity values, with the 52% copper oxychloride and systemic fungicide treatments showing slightly lower values ​​compared to the Spiralis Long Life treatment (Figure 5). However, the oil from the three treatments evaluated could be classified as Extra Virgin Olive Oil (EVOO) according to the standard quality criteria for this classification. 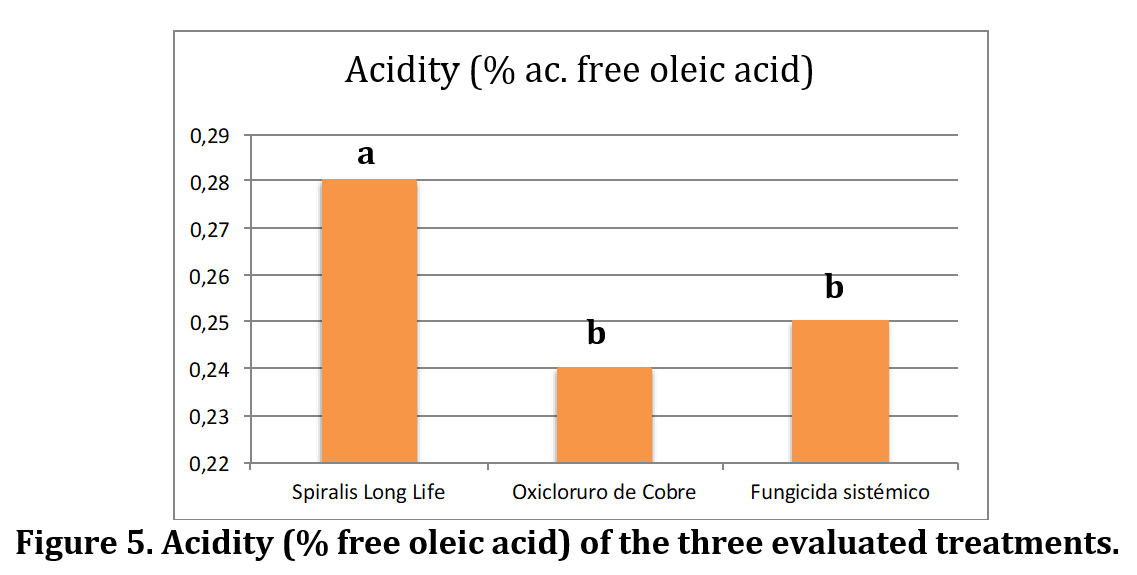 All these results could be interpreted from two points of view:

The average price of early harvest oil is agreed between buyer and seller and depends on many factors, but in general it is usually a higher price than the average price of EVOO at any given time. For example, in week 33, from August 16 to 22, EVOO had an approximate price of € 3.27 / kg; In week 32 it reached a price of € 3.52 / kg, however, in week 31 the price was € 3.18 / kg. In any case, they can be considered super prices if we take into account that the average for the 2019/2020 campaign was € 2.13 / kg. If we take as a reference an average price of € 2.65 / kg and taking into account the yields of fat obtained in the test carried out, for an average production of 7,500kg of olives per hectare, the following profit margins would be obtained (Table 2):

In view of the results obtained, we can affirm that the Spiralis Long Life product is effective for the control of Repilo in olive groves, positively influencing the quality of the harvest in terms of fat content.