Fruiting, production and ripening of the olive

Fruiting, production and ripening of the olive

From the fertilization of the “rapa” (olive flower) and until the olive reaches its maturity, the fruit goes through a series of stages according to a precise and determined pace.

Pollination takes place during fertilization, this is the transfer of pollen from the anther of the flower to its stigma or from another flower. Usually, only one of the four seminal primordia of the ovary is fertilized and begins to grow. It has been observed in numerous olive varieties that cross-pollination anticipates the growth of fertilized seminal primordium compared to self-pollination, increasing the need for assimilates in these small fruits. This results in a strong competition between them and the flowers yet to fertilize, which turns out into a massive abscission of less competitive flowers and young fruits. This is the reason that the percentage of curdled flowers that give rise to fruit development is so low (1-2%).

Quantitatively , the growth of the olive, like any other drupe, goes through several phases. In the first phase of growth, both cell division and expansion contribute to the increase in fruit size. This phase concludes around the end of sclerification or hardening of the bone (endocarp), which occurs between 7 and 9 weeks after flowering. After the period during which the growth slows or stops, a second phase begins where the olive experiences another increase in size, which concludes with the veraison or change in color (epidermis or epicarp) towards yellowish green tones that indicate the beginning of ripening. 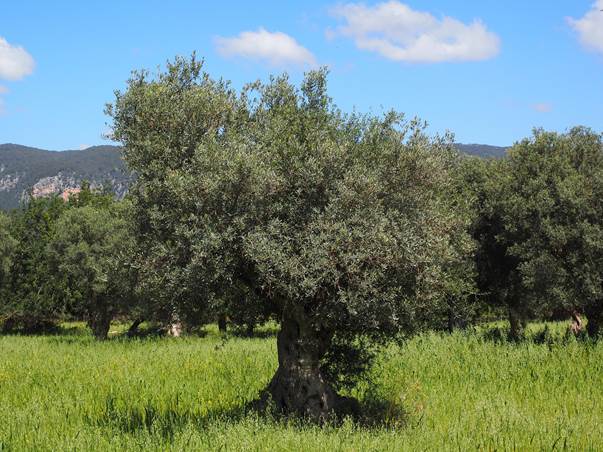 Synthesis of fatty acids (lipogenesis) in the pulp cells of the olive (mesocarp) determines the fat yield. The accumulation of lipids begins during the drupe growth stop phase and concludes at the beginning of ripening, in other words, lipogenesis takes place at the ending of the hardening of the bone to the veraison (envero). These data seem to confirm previous studies on the fat yield of the olive that indicate that the amount of oil per olive reaches its maximum at the beginning of ripening and fluctuations from here are mainly due to variations in the humidity content of the pulp. 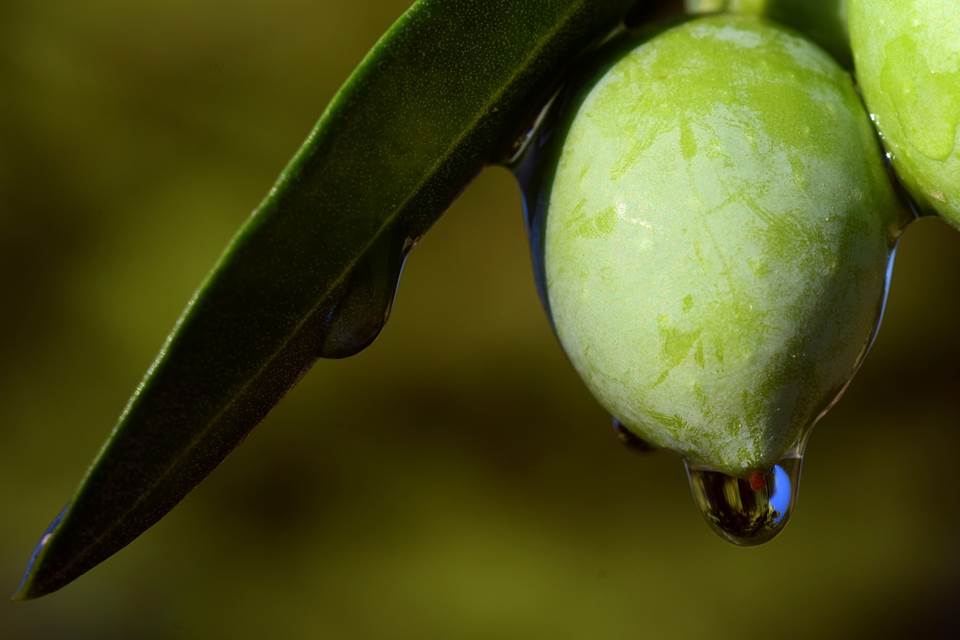 Three different phases can be established during the lipogenesis, (Frías et al., 1991):

Conditions of hydric stress during lipid biosynthesis and abnormally low pulp/bone ratio causes a reduction in the capacity of oil formation and thus its fat content. There is a negative correlation between the production, the size of the fruit and the fat content of the pulp. Just like that, seasons with large crops often give fruits of smaller size and lower fat content than those obtained in seasons of low production (Lavee and Wodner, 1991). 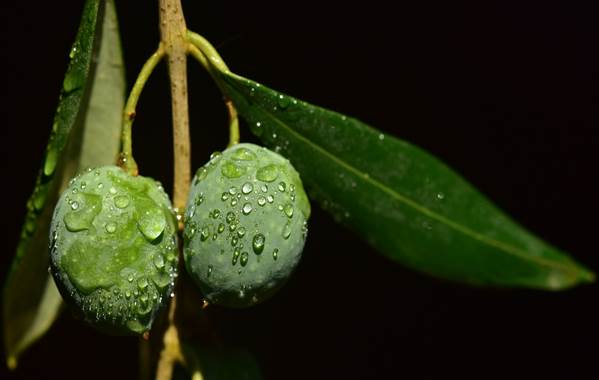 Water is the other major component of the fruit along with the oil and decreases during the ripening process, showing significant variations as a result of climatic conditions from mid-November (rainfall and frost regime). In order to eliminate water interference when expressing the fat content of the fruit and to accurately indicate the completion of the oil formation phase, it is advisable to express the fat content on dry matter, since this parameter remains constant once the synthesis of lipid stops, unlike when it is expressed on fresh weight, since this sample increases until very late periods (late January), mainly due to the decrease in the humidity of the fruit. The fat content on dry matter remains constant from the moment the lipid synthesis is completed, in other words, the oil formation stops between mid-November and early December, depending on the variety considered (Beltrán et al. , 2017). 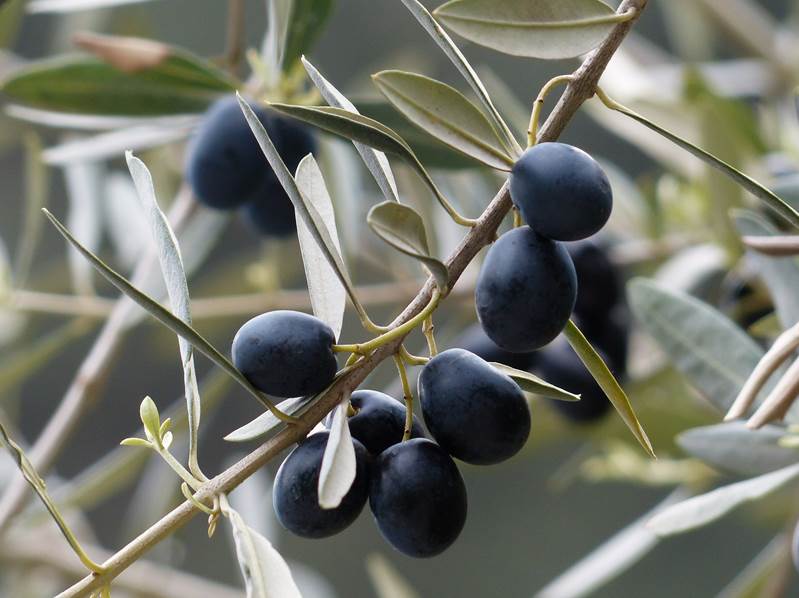 IMPROVING THE PRODUCTION FROM A NUTRITIONAL VIEW

To favor the synthesis of fatty acids it is necessary to maintain a good nutritional level of the olive tree, focused mainly on the elements to be contributed during this stage in order to be able to express the greatest capabilities of the cultivated variety in terms of fat yield.

Potassium is the element that is extracted the most in the crop at harvest. This means that it is a very important element in the nutrition of the olive tree and that it is magnified due to the influence that the culture medium has on the availability of potassium from the tree. In fact, it constitutes the main nutritional problem of the dry olive grove, with great consequences on the crop since potassium intervenes in the mechanism of closure and opening of the stomata. Located in the cytoplasm inside the plant and helps in keeping it turgid. In conditions of deficiency, the stomatic closure is not complete and the tree continues to lose water through perspiration, and may show symptoms of dehydration. Well-nourished trees, by contrast, will easily tolerate drought conditions by completely closing stomata at times of high radiation.

Deficiencies, or low potassium levels, are popular in large part of the olive grove. Deficient trees show apical or lateral leaf necrosis and branch defoliation; In seasons of harvest, the fruits are wrinkled and smaller than normal. These deficiencies manifest themselves more intensely in dry olive grove and in dry years, since the low soil humidity limits the diffusion of potassium ion (K+) in the soil dissolution and prevents its absorption by the roots. Deficiencies are also frequent in soils with low clay contents, as the buffering power of the soil is lower and, consequently, the K+ available for the tree.

The causes for potassium deficiency are diverse. In addition to the lack of soil humidity in rainfed plantations, stands out the true nature of cultivated varieties and the interactions with calcium (Ca2+) and magnesium (Mg2+) ions, which in limestone soils can explain the generalized deficiencies of this element. 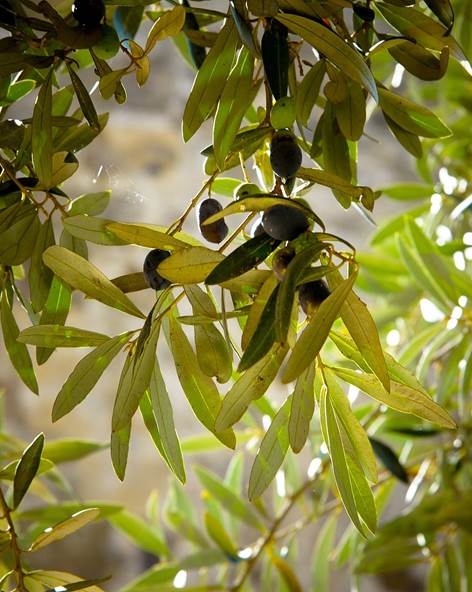 Olive groves with potassium deficiency are difficult to amend, since the potassium, as fertilizer, is absorbed in smaller quantities in deficient and with water stress trees, even if it is applied via foliar (Restrepo et al., 2008a). Therefore, it is convenient to annually monitor the levels of potassium in leaves and apply this element when low values ​​are reached, before reaching deficiency. In soil applications, it should be considered that potassium, unlike nitrogen, has low mobility, particularly if the clay content is higher. This means that potassium stays on the soil surface, unless it is located in the vicinity of the radical system (Fernández-Escobar, 2017). For this reason, in dry land it is recommended 2 to 4 foliar applications at 1-2% of K+ depending on the nutritional status of the tree, although repetition is usually necessary in successive seasons until the levels of K+ in leaves are raised to its appropriate level. That is to say, foliar applications must be made both in seasons of high load and in seasons of significant alternation (vecería – masting).

Young leaves absorb potassium to a greater extent compared to adult leaves, so applications of this nutrient in spring are very effective (Restrepo-Díaz et al., 2009). On the other hand, from the period of hardening of the bone, when lipogenesis begins, K+ treatments are of great interest for two reasons. On the one hand, proper nutrition of this element improves the stomatic behavior of the plant, which will close the stomata at increased radiation during the summer, thus reducing the water stress of the plant (lower perspiration rate). On the other hand, during the fatty acid synthesis phase, the fruit is the largest potassium drain, whose levels must be adequate to improve the fat yield of the fruit and increase its size. Applications after the veraison (envero) will not improve neither the size nor the fat content of the olive. 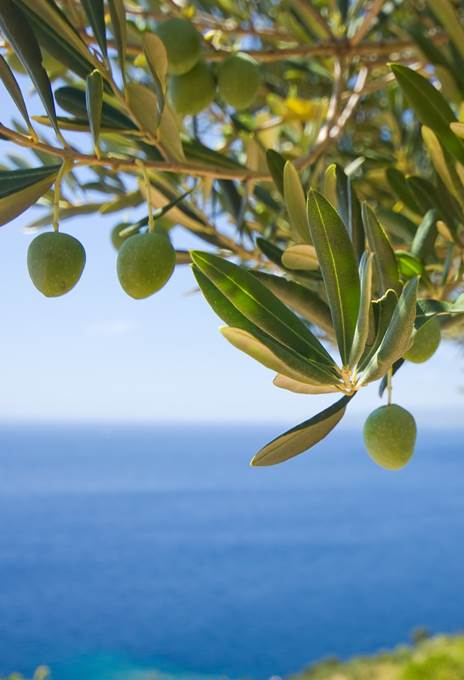 In addition to this, potassium is essential for the following physiological functions:

Phosphorus is an important element in the fertilization of crops, related to the formation of root tissue and flowering, although it is crucial for the plant for other reasons. It is an essential element of difficult dosage and is required in notably smaller amounts than nitrogen. It is absorbed in anionic means, usually as orthophosphate ion (H2PO4-), depending on the pH from the soil. It is present in constitution compounds (phosphate sugars, nucleic acids, phospholipids and coenzymes) and in energy transport compounds (ATP, NADP, FAD) (Westerman, 1990). Its main physiological role consists in the phosphorylation of organic substances. Phosphoric acid temporarily combines with a carbonyl, enolic or nitric group to form an energy-rich compound: adenosine triphosphate (ATP) which, decomposing in ADP, releases this energy which is used in metabolic processes (Baeyens, 1970). These metabolic processes create chemical reactions that directly intervene in the survival, growth and reproduction of plants, such as photosynthesis, respiration, solute transport, translocation, protein synthesis, nutrient assimilation, differentiation of tissues, and in the formation of carbohydrates, lipids and proteins that intervene in these processes or are a structural part of plants.

It is likely that only trees grown on soils with very poor phosphorus will have poor levels of leaf concentrations. Symptoms of deficiency begin in the lower leaves, that is, in the older ones, turning from a dull dark green color to a characteristic reddish or purple color and which completely dries the leaves. The number of sprouts decreases, with the presence of thin and short stems with small leaves. Root development and regeneration, flowering and fruit setting are also reduced.

For all that, from the Technical Department of Cultifort, we recommend making interventions during the fruiting period with specific nutritional products, adapted to each phenological stage, in order to improve the quality of the fruits. In the example in this article, the olive grove, either dry or irrigated, we offer you a product specially suited to improve fruiting and quality: Fertraz Fruit.

Fertraz Fruit is a liquid formula with high levels of easily assimilable phosphorus and potassium, which helps to improve the fruits in size, uniformity and composition (tocopherols, polyphenols, fatty acids, sterols, etc.). 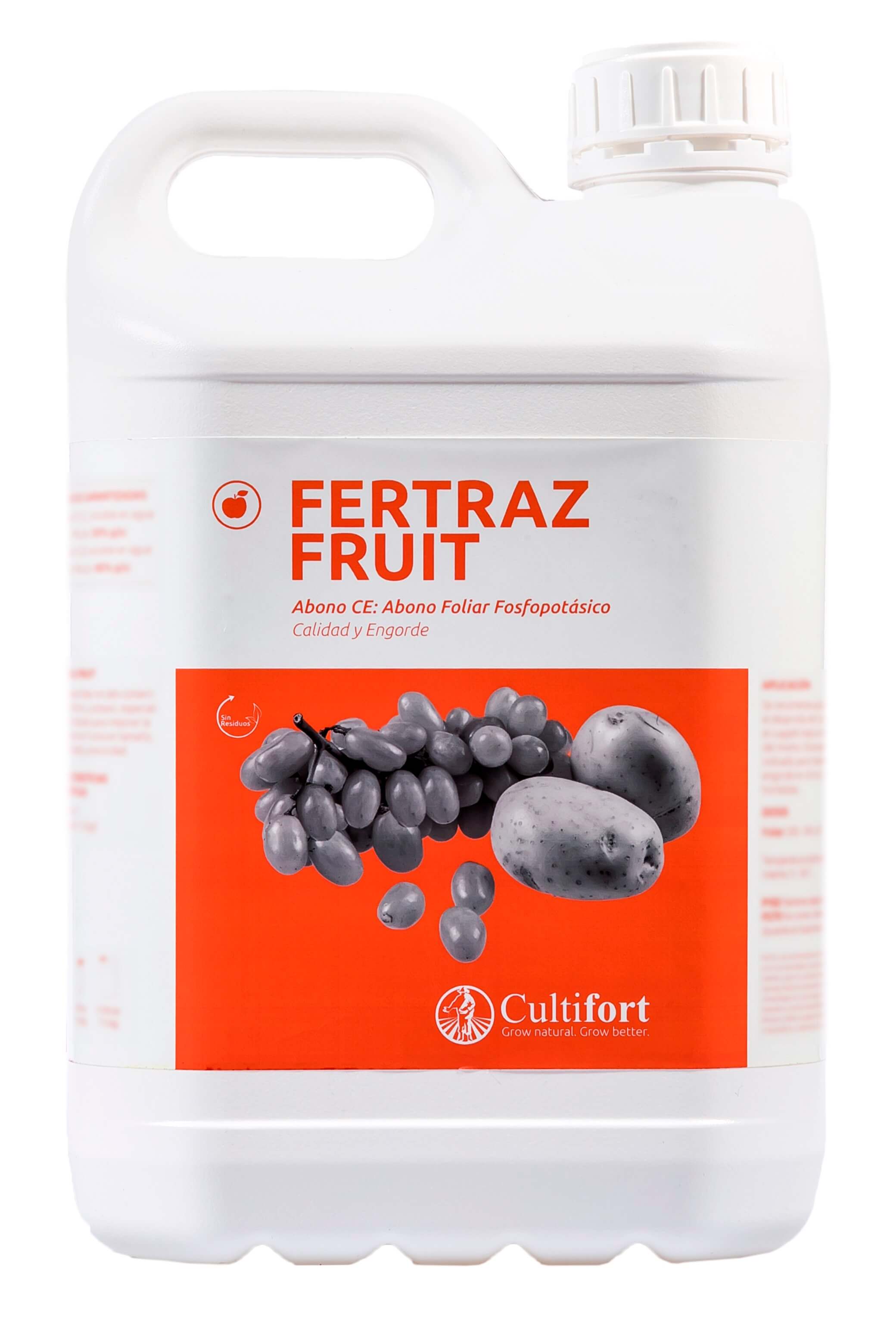