The sweet potato or sweet potato is a crop which originates in the South American tropical zone and belongs to the Convolvulaceae family. After the conquest of the American continent, its cultivation spread to other areas of the world.

It is known by different synonyms, yeti in Paraguay, kumara in Peru, “boniato” in Cuba, “cara” or “jetica” in Brazil, “moniato” or “camote” in Mexico and Argentina, and sweet potato (“patata dulce” o “batata azucarada”) in Europe and Asia.

It is a perennial plant that propagates vegetatively and is grown as an annual plant. Because it does not have a defined maturity, it can be harvested following cultivation periods of widely variable duration.

The plant has generally a crawling habit with stems that extend horizontally above the ground developing relatively low foliage. Four general types of plants can be distinguished: erect, semi-erect, extended and very extended.

The tuberous roots or sweet potatoes are the most important part of the plant, since it constitutes the main object of the crop. They normally originate in the knots of the stem that is underground and can develop to a length of about 30 centimeters and a diameter of 20 centimeters. These false tubers produced at the roots, differ according to variety in terms of shapes and colors. Its pulp is sugary, perfumed and rich in starch, with a high content of carotene and vitamin C and an appreciable proportion of protein. The weight of the tubers can vary from 200-300 grams to 6 kilos.

Its agronomic properties, such as its great hardiness, which allows it to adapt to marginal soils, its minimal requirement for agrochemicals, the easy propagation system and its high energy production / hectare / day, make this species grow in small spaces and perfectly adapts to rotations with other crops. On the contrary, it is a plant species overly sensitive to viral diseases.

Diseases caused by viruses are probably the least understood of all sweet potato diseases in particular and of all plant species in general. Many of the diseases with a suspected virotic etiology are transmitted by vector insects, planting material, or by grafting. Plants with severe or acute virotic diseases can occasionally be detected visually and easily avoided, with the consequent economic or harvest loss that this entails. However, detection by eye inspection is not always safe in all stages of the production cycle, since it can be confused with other series of symptoms or pathologies of nutritional deficiencies or other pathogens.

Some of the methods of prevention of this type of disease, passes through the phytosanitary control of vector insects or by sowing in areas free of the source of the inoculum. Overall, efforts to prevent virus spread by controlling vectors have been unsuccessful. As a control method, the use of virus-free material (known) is proposed, which involves a work of selection and isolation of healthy virus-free material, sometimes going through chemotherapy or thermotherapy before in vitro culture, to obtain a required number of healthy plants. This whole process is long, tedious, expensive and sometimes insufficient. The development of tolerant or resistant cultivars is another more viable alternative for control, ruling out sensitive genotypes as soon as possible during the selection process (phenotypically, lack of vigor or low yield). Although it should be borne in mind that the use of these tolerant or resistant cultivars does not have to be in a different geographical area or region than the place where they have been selected, because there may be differences with local viruses or variants of them and their vectors.

It seems, therefore, that the prevention and management of the crop and its environment constitute the best tool to try to avoid the incidence of virotic diseases in our crops.

From Cultifort’s R&D Department and within our “Natural Defensive Biotechnology” line, we have developed Spiralis Long Life and its Spiralis ECO Long Life version.

In a first phase of action, Spiralis will induce changes at the structural level in the cell walls of plants, causing the accumulation of calose and lignin. This will suppose a greater lignification of the tissues, constituting a physical barrier against different types of stress.

In a second phase, Spiralis will promote and facilitate the mobilization of precursors of the natural defenses of plants, promoting the synthesis of endogenous molecules with high defensive capacity and systemic, both ascending and descending.

Both effects involve the activation of systemic resistance mechanisms, causing a reinforcement, both internally and structurally, of plants, inducing the synthesis of compounds (chitinases, glucanases, phytoalexins, etc.) with the ability to degrade the cell wall of different pathogens.

Thanks to the activation and development of these systemic resistance mechanisms, with Spiralis we obtain healthier and stronger plants, better developed, photosynthetically more active, more homogeneous and productive, etc., preventively alleviating the incidence of pests and diseases, including those caused by virotic agents, reducing the need for chemical inputs or pesticides on our crops.

An example of the beneficial effects that we can obtain using Spiralis in a preventive and periodic way in our crops, are the excellent results obtained in a sweet potato plantation in the area of ​​Sanlúcar de Barrameda (Cádiz), against the incidence of viruses that cause mottling, mosaic, yellow dwarfism, etc

Photographs of the evolution of the treatment. 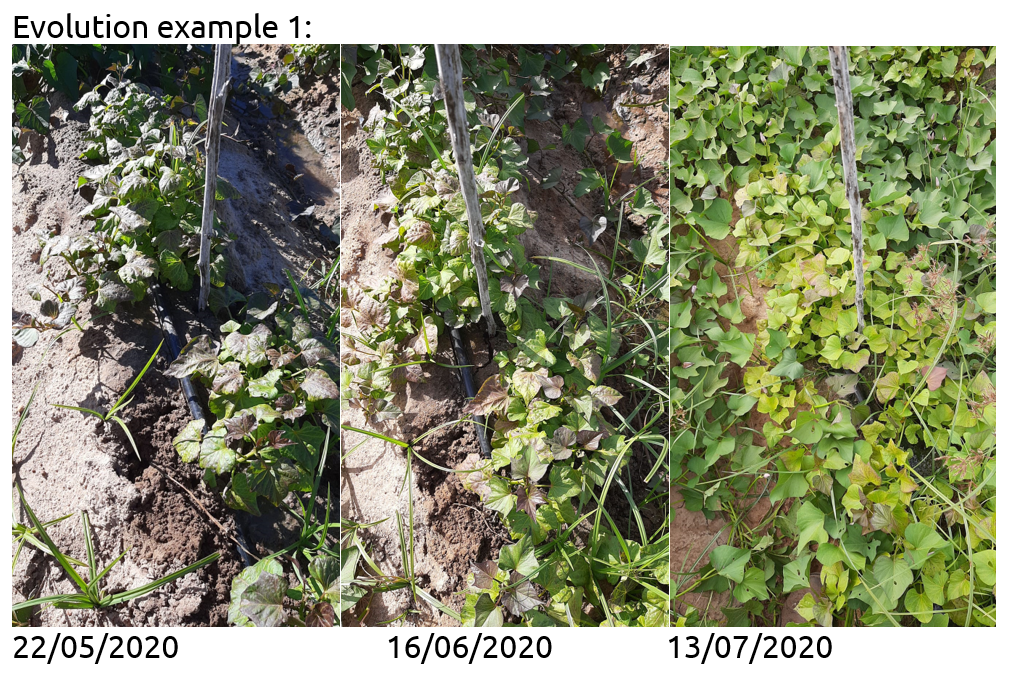 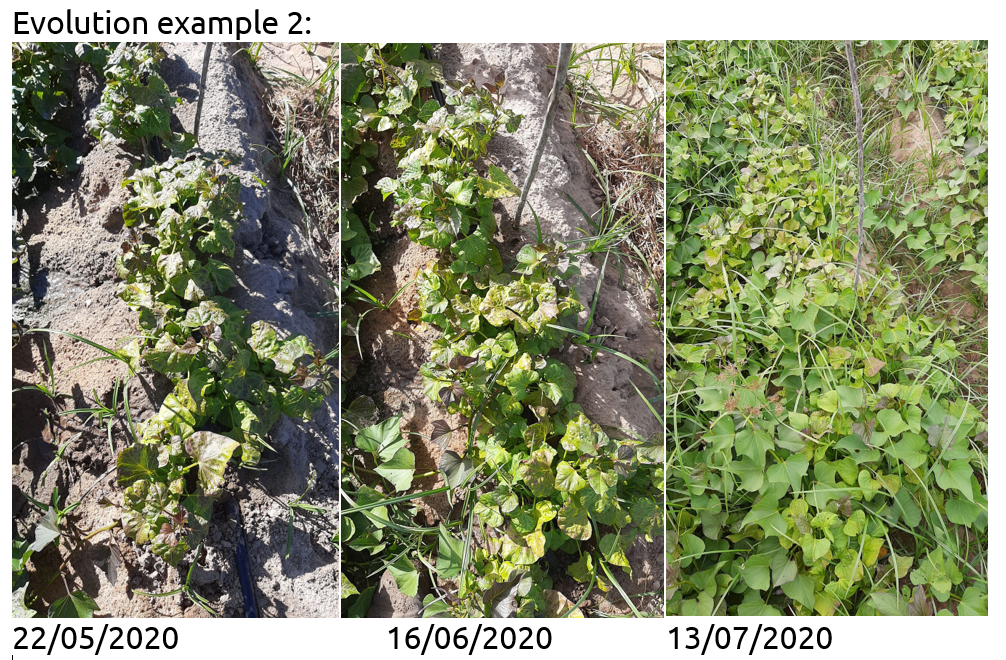 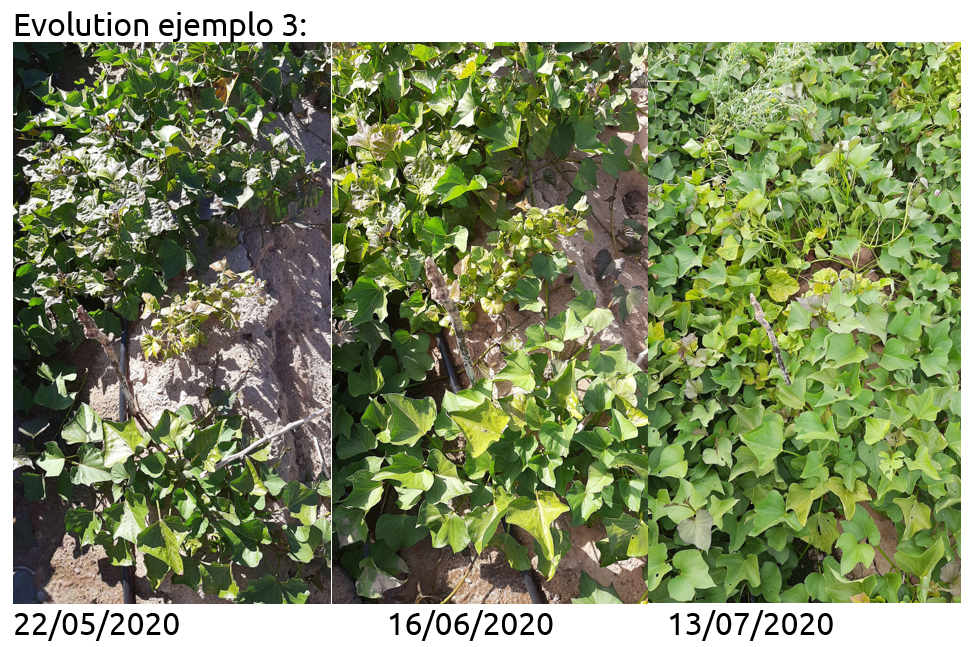 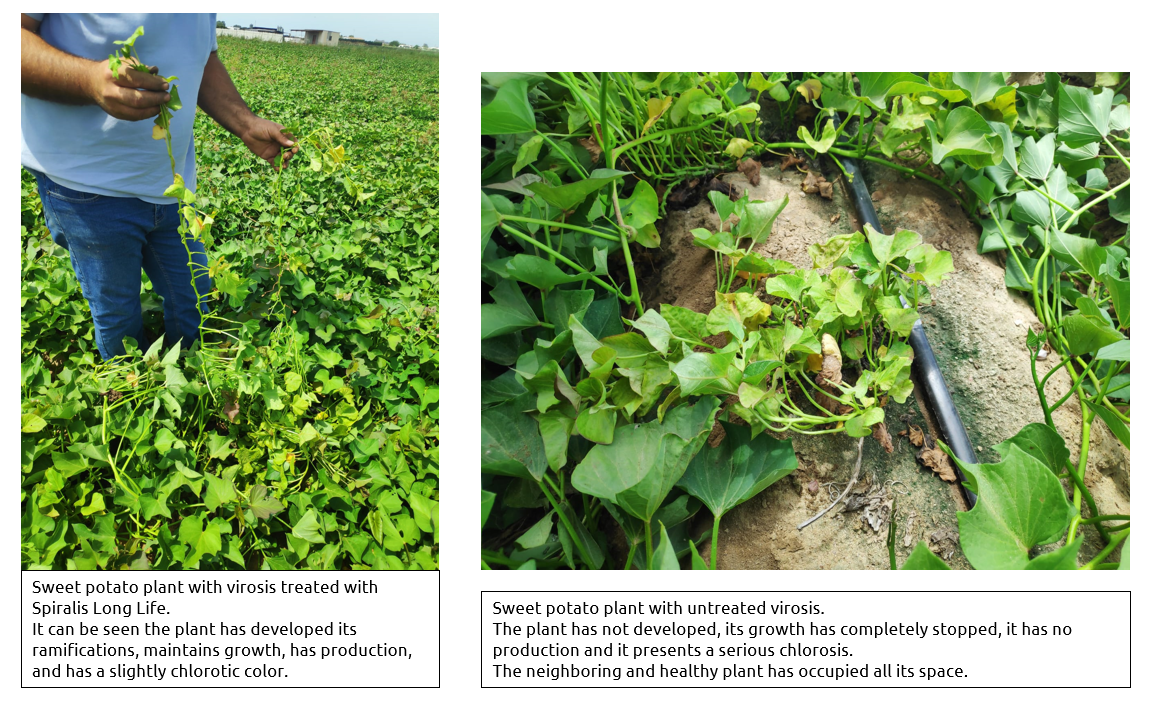