Cauliflower (Brassica oleracea cv. Botrytis) is a plant of the cruciferous family. It enters the group of plants that we grow for its flower and over time cauliflower species have been selected, prioritizing the formation of a thick and compact floral mass for consumption. They are plants of cold times, even so, the most important thing is that the flowering time does not coincide with very hot months or with frosts. They adapt well to different pH, although they prefer neutral soils (they do not adapt well to limestone soils), well soft and fertilized, and with regular humidity throughout the growing cycle. It requires abundant and regular hydric contributions, maintaining a permanent humidity. When they have formed the inflorescence, it is not advisable to water them overhead (sprinkling), as they could be damaged by fungi or rot. 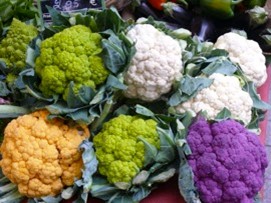 One of the fungi that affects cauliflower is Mildew. This fungus also affects other types of crucifers such as broccoli, radish, turnips, … It can be affected by the fungus in any stage of growth. However, due to the conditions that it requires cold and humidity to develop, it usually appears in the seedling stage and in mature plants. It produces greasy-looking spots of different shades on the leaves, which later turn brown and wilt (Weinberger and Srinivasan, 2009). 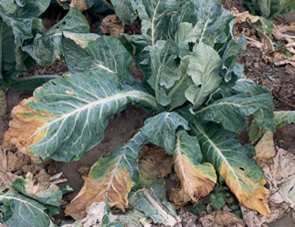 Another fungus that causes rot in cauliflower is Botrytis cinerea. It is an ascomycete fungus commonly known to be the cause of the disease of gray mold or gray rot. It is considered a necrotrophic fungus, that is, it feeds and parasitizes the host, producing toxins and other components that destroy its cells so that, in this way, it can feed on the remains of dead cells (Veloso and van Kan, 2018 ). Its incidence is highly conditioned to the existence of favorable conditions of humidity, rain and / or excessive or inadequate irrigation and relatively cool temperatures, so it is not usually an endemic disease, but it can directly affect the quantity and quality of the harvest. . The development of resistance of Botrytis cinerea to common fungicides and the tendency to reduce the use of pesticides is driving the effort to develop new control alternatives (Yourman and Jeffers, 1999).

Cauliflower does not get rid of bacterial diseases and if the humidity and temperature conditions are favorable they can cause serious damage. The most important bacteria that affect this crop are (Batabyal et al., 2016):

Various studies on the induction of defense mechanisms in cucurbits (Ji and Kuc, 1996) show that plants infected by viruses, fungi or bacteria frequently synthesize a series of proteins related to pathogenesis (PR proteins), whose synthesis can also be be induced by chemical treatments or under stress situations (Benhamou, 1996). Chitosanase and peroxidase enzymes, present in many plants, are involved in defense mechanisms of plants against possible pathogens. The reactions triggered by these enzymes are believed to act as inducers or activators of other biochemical defense mechanisms, such as phytoalexin production or tissue lignification (Mauch and Staehlin, 1989

The use of natural compounds to control plant pathogens can lead to a significant reduction in the use of fungicides. Among the so-called natural elicitors, chitosan has great potential, as it is a biodegradable compound and has antimicrobial activity and as an inducer of natural defenses (Benhamou, 1996; Ben-Shalom et al., 2002).

Within our innovative R&D line “Natural Defensive Biotechnology” we have developed Spiralis Long Life. It is a fertilizer solution that includes a complex of organic acids and selected peptides, related to green and red algae, of rapid assimilation, which enhance the bioprotective effect against various abiotic stress factors. Spiralis Long Life promotes the induction and facilitates the mobilization of precursors of the natural defenses of plants, thereby enhancing the synthesis of endogenous molecules, with high defensive capacity and with systemism. In other words, Spiralis activates the natural defense mechanisms of plants and does so through two mechanisms of action:

Spiralis Long Life is a last generation formula with molecules highly compatible with plant tissues that allow their total and immediate absorption (between 1 and 8 hours) and whose effect can last several weeks.

On the other hand, and within the same line of “Natural Defensive Biotechnology”, CULTISANO Cu is another of our most innovative products. It is a liquid combination of chelated copper with EDTA along with chitosan. Chitosan is the main derivative of chitin, a natural polymer from the shell of crustaceans, with control properties on the development of certain bacteria and fungi. In addition to activating plant self-defense mechanisms (synthesis of PR proteins, such as chitinases), from a nutritional point of view, it stimulates plant development, delays its senescence and lengthens productive life.

CULTISANO Cu takes advantage of the synergy between the protective power of copper and the improvement of the antifungal and antibacterial defenses induced by chitosan, in such a way that it provides two fronts of action:

Both CULTISANO Cu and Spiralis Long Life, applied 10-15 days before harvest, help to extend the postharvest life of the fruits.

During the autumn-winter of 2019-2020, the Cultifort R + D + I department developed a trial in Lebrija (Seville) to evaluate the effect of Spiralis Long Life and Cultisano Cu on cauliflower (Brassica oleracea cv Botrytis), as alternatives to the use of pesticides to control rot and improve the quality of the harvest and postharvest, being non-toxic, biodegradable, zero residue, bioactive products and no applicable safety period. 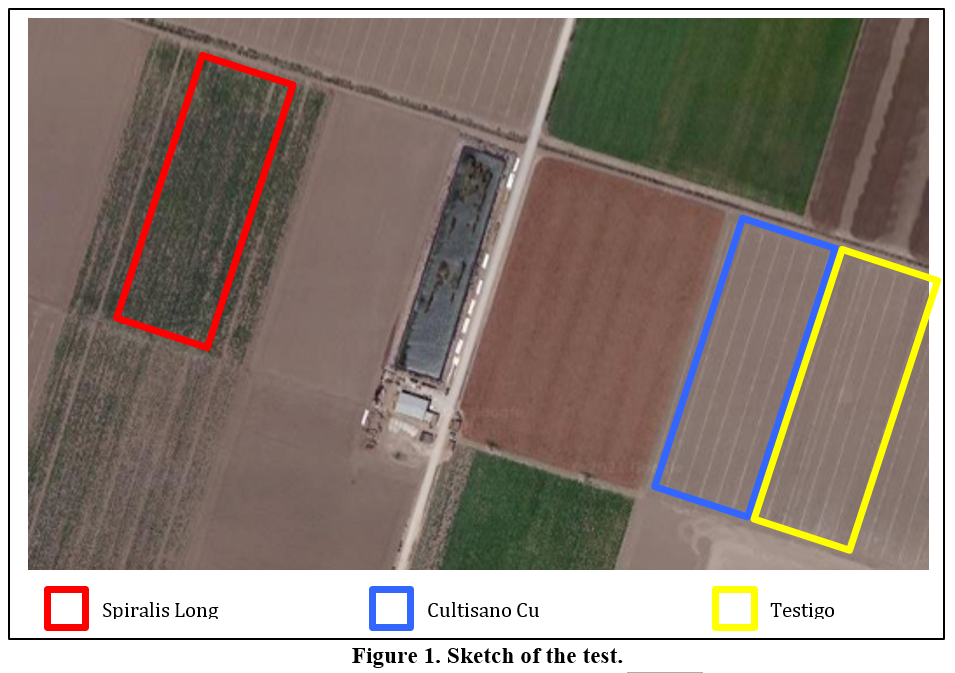 The applied treatments have been:

From the first application, weekly controls were carried out by means of the visual recognition of satellite images (accompanied by a visual recognition in situ) that could indicate differences in each evaluated treatment with respect to the vegetative growth or health status of the test plots.

Below are the images corresponding to the last evaluation carried out, one week before harvest, where vegetative growth (Figure 2), chlorophyll content (Figure 3) and humidity (Figure 4) were analyzed. 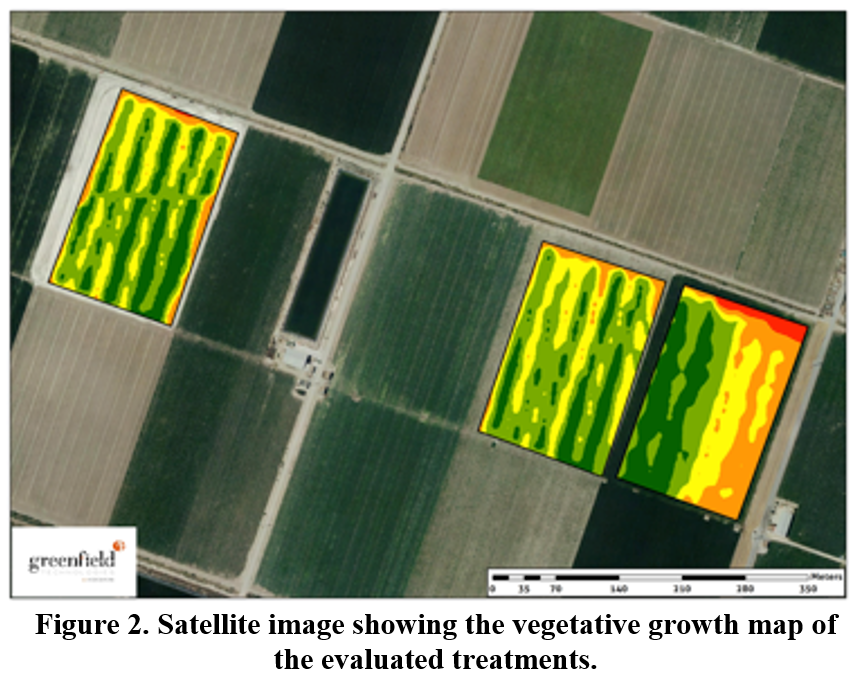 At the beginning of the evaluations, an incipient incidence of mildew was detected in the plot treated with Cultisano Cu, which stopped after this first treatment.

In view of Figures 2 and 3, no differences could be established regarding vegetative growth and chlorophyll content between the Sp and Cu treatments, which presented a much higher homogeneity compared to the T treatment, where large differences were observed in the evaluated parameters, probably as a consequence of some type of abiotic stress suffered in this untreated plot. These data indicate the capacity of the alginic complex of Spiralis Long Life and of the chitosan contained in the formulation of Cultisano Cu to act as biostimulants of the vegetative growth of plants in addition to their capacity as elicitors of plant self-defense. 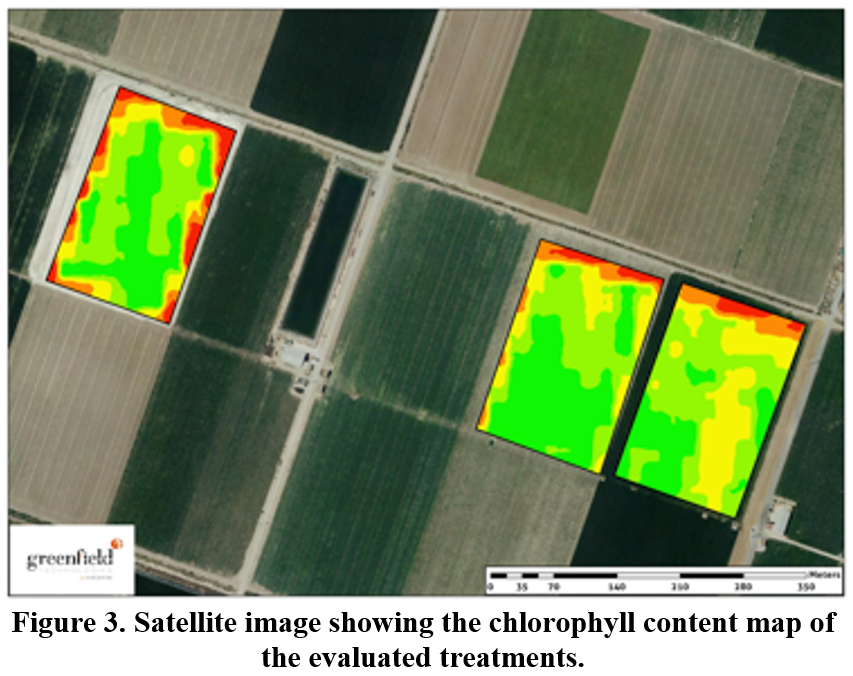 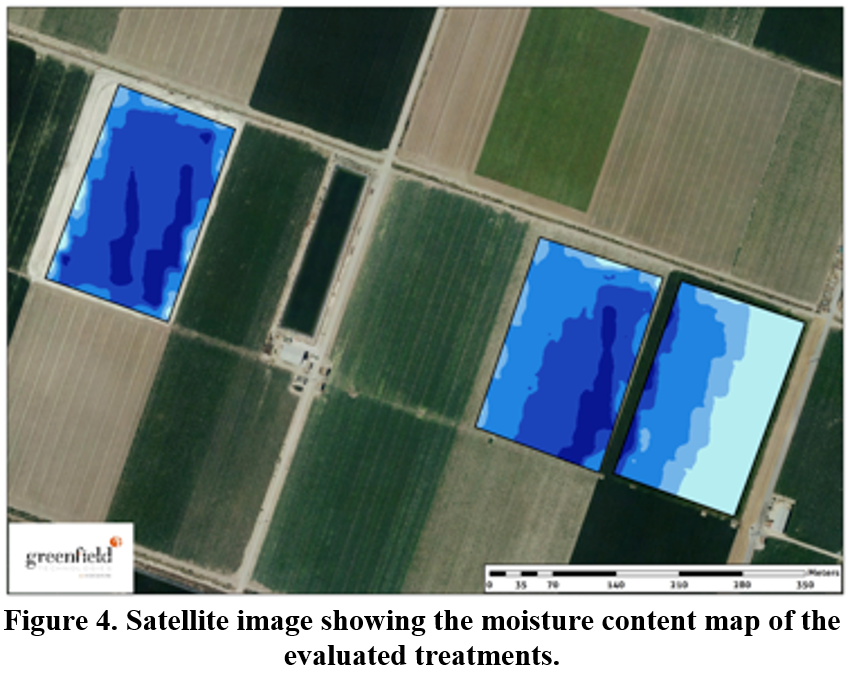 Regarding the moisture content, the Sp and Cu treatments presented the highest moisture contents compared to the T treatment, as shown in Figure 4. This would explain the greater homogeneity with respect to vegetative growth and chlorophyll content since, a well hydrated plant, other conditions being equal, will be able to carry out more photosynthesis and, therefore, will achieve better vegetative growth as well as higher production and better quality.

The behavior of the different treatments evaluated maintained the same trend from the beginning to the end of the crop cycle, maintaining an optimal health status.

Table 2 shows the percentage values ​​of weight loss throughout the postharvest period of the pellets. In view of the results, a similar behavior of the Spiralis Long Life and Cultisano Cu treatments was observed in relation to weight loss, with a better preservation being visually more evident in the Cu treatment, where the appearance of the pellet one month After harvested it was better than Sp. The Control treatment showed a greater percentage of weight loss than the rest of the treatments, also resulting in the treatment with the worst visual appearance as shown in Figure 5. 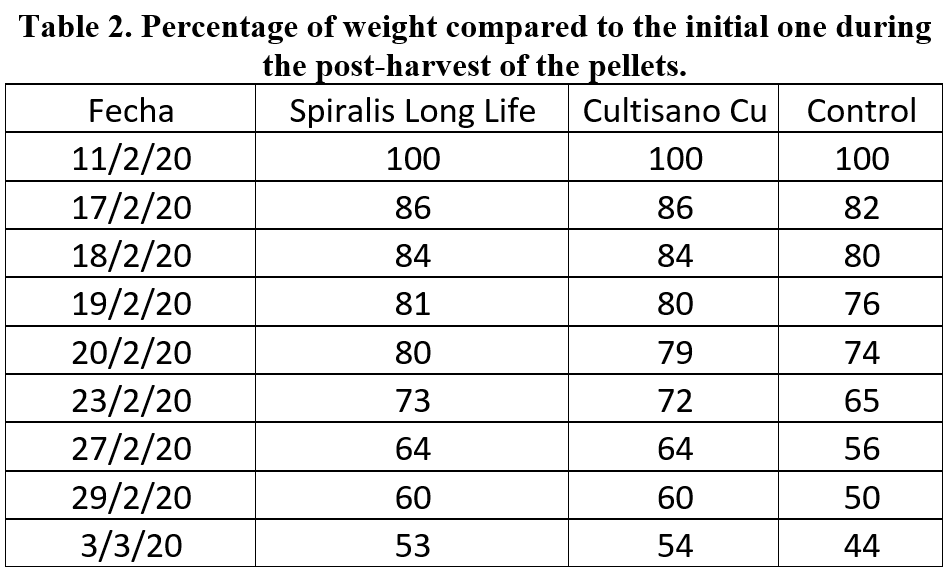 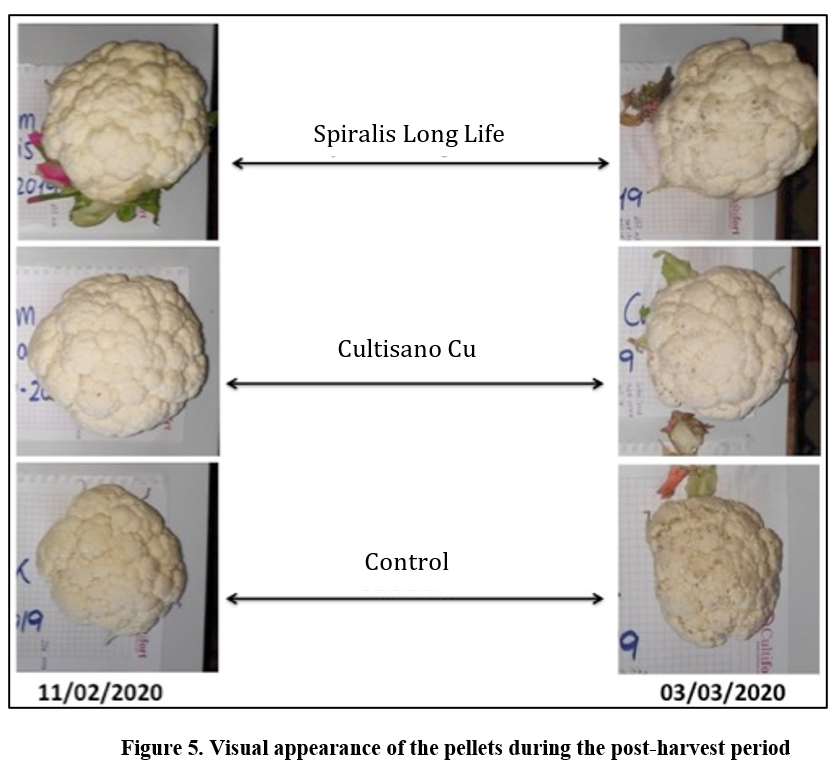 Therefore, we can conclude the following:

To check the references leave a mail at info@cultifort.com