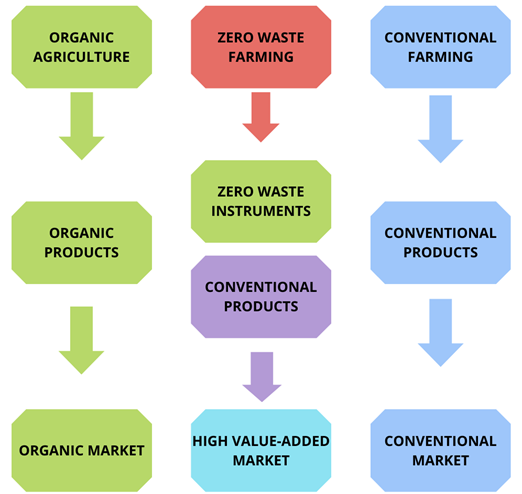 The “Zero Residue” concept implies the need to reach the end of the crop with a residue level below the established maximum residue limits and with a quantity of detectable chemical substances that comply with the legislation, however, the way in which we reach this concept changes, since in the ecological alternative all the inputs must be ecological (therefore it is assumed that there will be no detectable residue at the end of the crop), however in Zero Residue crops, the inputs do not need to be organic, although the part dedicated to crop protection must control very well the safety deadlines so that the active ingredients are below the MRL (Maximum Residue Limit) established by Europe (or by the supermarkets themselves).

The points in common between organic farming and Zero Residue are clearly a commitment to sustainability, working with the ecosystem and not against it. The great similarity between these two forms of production is that both must reach the consumer without any type of residues (insecticides, fungicides, herbicides…), but producing with an organic seal entails more restrictions, for example: neither insecticides nor fungicides of synthetic origin can be used, all of them must be of natural origin, as well as fertilizers, which must be of organic origin, not mineral. Herbicides cannot be used either.

In Zero Residue products, the only regulation is that the final product must have no residues. In other words, herbicides can be used in the same way as a conventional crop (as long as there are no herbicide residues on the crop), just as it is also possible to fertilize in a conventional way, with mineral fertilizers. So, can synthetic phytosanitary products be used in Residuo Cero? The answer is “yes”. The difficulty is how and when to apply them so that the crop has no residues. For this it is important to know the degradation of phytosanitary products and in which phenological stages of the crop they can be applied. Of course, it is also possible to use phytosanitary products allowed in organic farming.

Those farmers who are able to manage their crops in Zero Residue will be able to market their products for export or large-scale distribution, where controls in terms of residues are stricter than in local or conventional markets. This usually also implies an increase in profitability.

The final consumer will not notice the difference, at the organoleptic level, between a product that is grown in an organic or Zero Residue management, the taste or color of the final product may be due to a set of factors (climate, soil, rootstock, variety of crop …).

On the other hand, there are many Zero Residue products composed of active ingredients declared today as non-organic because of their origin, but which do not leave any harmful residues for the environment. This is where all these Zero Residue solutions come into play, complementing the action of conventional products, often even replacing them.

Although organic farming is a very interesting path, the truth is that not all areas are so benevolent to dispense with conventional inputs, and for that reason we must play with Zero Residue certified products that allow us to keep our crop in the best conditions.

Most of the agricultural inputs used in zero residue agriculture farms are generally made from raw materials of natural origin.