A key step once the fruit recollection is terminated, in the fertilization of the woody crops at the face of the nets campaign. This step of post-harvest propagation is a point that sometimes you don’t pay the necessary attention, being, nonetheless, an essential professional agriculture practice. 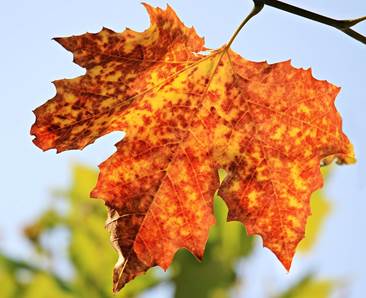 Once the harvesting is finished, whether it’s the recollection of cherry, almonds, apples or any other fruit species of a wooden type, a period starts in which trees need to accumulate nutrients as a reserve tactic, which will be useful as a base for sprouting and/or flowering of the next biological cycle.

In other words, just like those animal species that hibernate and collect food for the winter, some woody species must do their own thing; just in this case, the food will be the nutrients the farmer adds to them. 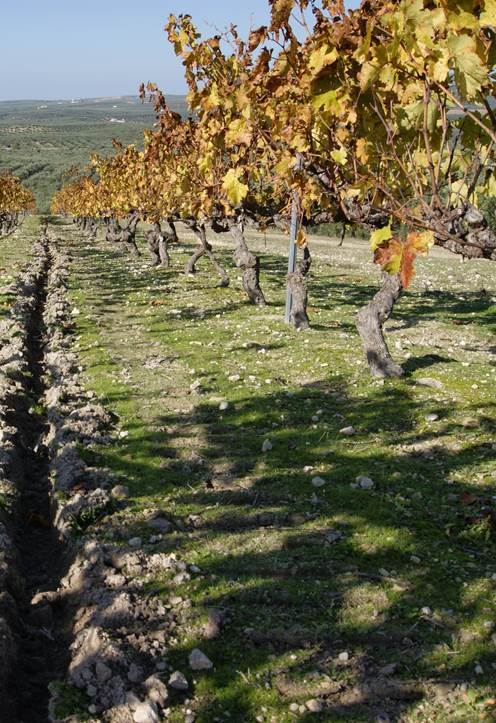 A significant part of the success of the next campaign depends of an application of nutrients once the fruit plant is unloaded. As a matter of fact, it’s about one of the moments of radicular development of the plant, something that must be taken advantage face-first to improve the efficiency of fertilizer

In deciduous fruit trees, mineral and organic reserves have a fundamental role in the first stages of spring growth. During this period, there’s practically no transport from the roots to the aerial part, which is why spring growth is fed by a high consumption of reserve amino acids like arginine and sugars, which are contributed mostly by reserve polysaccharides, and slowly generating the contribution by photosynthesis.

In the next table, it is specified the approximated distribution of the total nutrient needs in fruit leaves on each phase of development.

Once the quantities are better known as well as the nutrient calendar, you’ll need to know which place it is best convenient to apply them, under which shape, and which type of fertilizers. 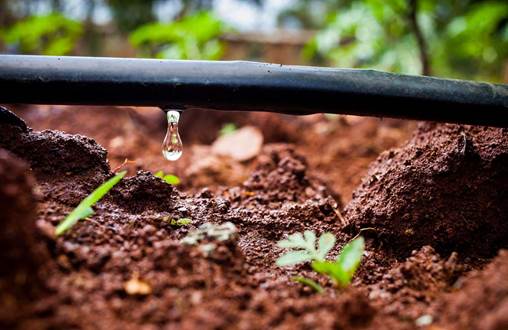 In the case of localized irrigation, it is possible to apply fertilization periodically through irrigation water, which allows us to position them better along with the explored soil by the roots.

Nitrogenized fertilization deserves special attention to avoid the maximum number of losses that could be made. The calculus of nitrogen quantity that must be added to the soil is obtained from the realization of the balance between quantities exported by cultivation, mostly weed covering the ground and the ones added by rain and irrigation.

It’s recommendable to complete fertilization NPK with organic soil conditioner, which, aside from bringing nutrients, they have many other advantages, like making the chemical, physical properties of the soil get better. In organic fertilizers, most nitrogen is its natural form, which needs a mineralization process so it can be admissible for crops. On the other side, short-time phosphorus appliance efficiency (in the first year) is less than the result of fertilizing with mineral phosphorus fertilizer, but in the long game, the exploitation is similar. And in the case of potassium, it’s found practically in everything in organic form, which makes its availability similar to mineral potassium fertilizers. 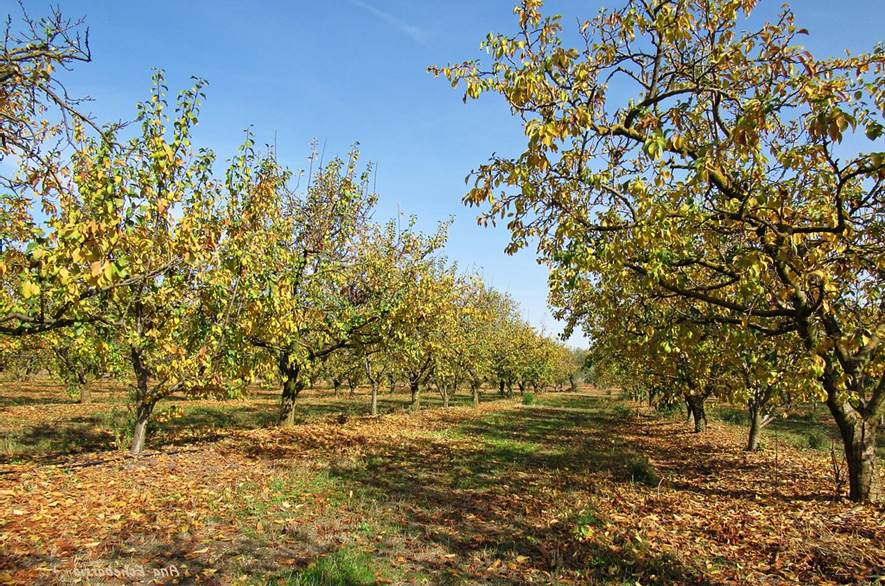 Aside from NPK macronutrients, the contribution of secondary elements (calcium, magnesium, and sulfur) is necessary for a larger cellular resistance and chlorophyll production without leaving aside the importance of other micronutrients like iron, manganese, zinc and boron, essential for critical vital functions of trees.

Post-harvest boron application is very effective, because it’s a very mobile element in the cinematic way, flowing towards the apices, and also the phloem way, translocating towards the wood and the roots, remaining in high concentration until next flowering, improving fecundation and eventually the curdled. On the contrary, zinc, which is important for growth and germination of pollen, has mobility only in the cinematic way, which is why in the post-harvest appliance, a great deal is left and fall with the leaf. Because of that, it’s our recommendation to apply zinc in post-harvest only when the analysis values are low or when the fruit species are very demanding in this element.

Because of all that, from the technical department of Cultifort, we’d like to recommend a series of products to have good post-harvest fertilization.

MICROVITAL-L: Liquid formula made of organic molecules or vegetable origin with magnesium and microelements. It influences the biological, chemical, and physical aspects of the soil. Organic matter is essential for soil life, favoring the development of the microbiota. Improves the aeriation, the infiltration capabilities and water retention, increases carbon/nitrogen relationship (C/N) and with it soil fertility, improves the clay-humid complex, the cationic interchange capabilities, the nutrient availability, makes the formation of the roots easier as well as the metabolic activity of the plants and delays foliar senescence, helping the plant to remain photosynthetically active for a longer amount of time, which will take a larger storage of reserve substances. It also avoids a microelement shortage. Thanks to its flavonoid molecules, the magnesium, and other elements, it provides a differential plus to the crops. 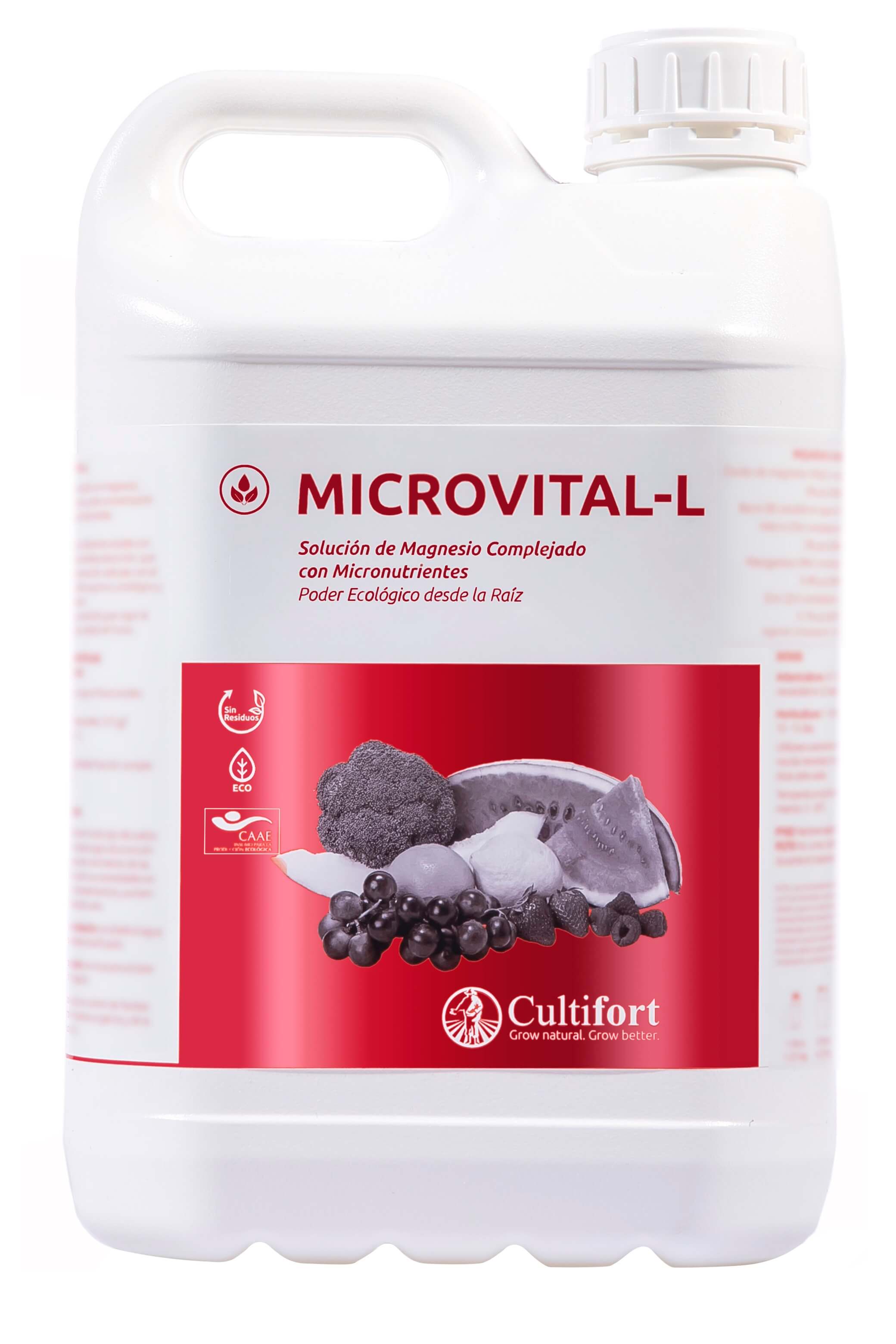 CULTUBORO PLUS: Liquid boron formula, compounded with ethanolamine and redactor sugars, of easy assimilation. Recommended to improve flowering (quality of the pollen tube and pollen) and the curdled, and also to induce radicular growth and the renewal of absorbent hair, due to its implication in cellular division and acts as a precursor of certain hormones. This element is found sometimes in deficient levels in calcareous soil and easily viable or in light soil, which indices its lack. 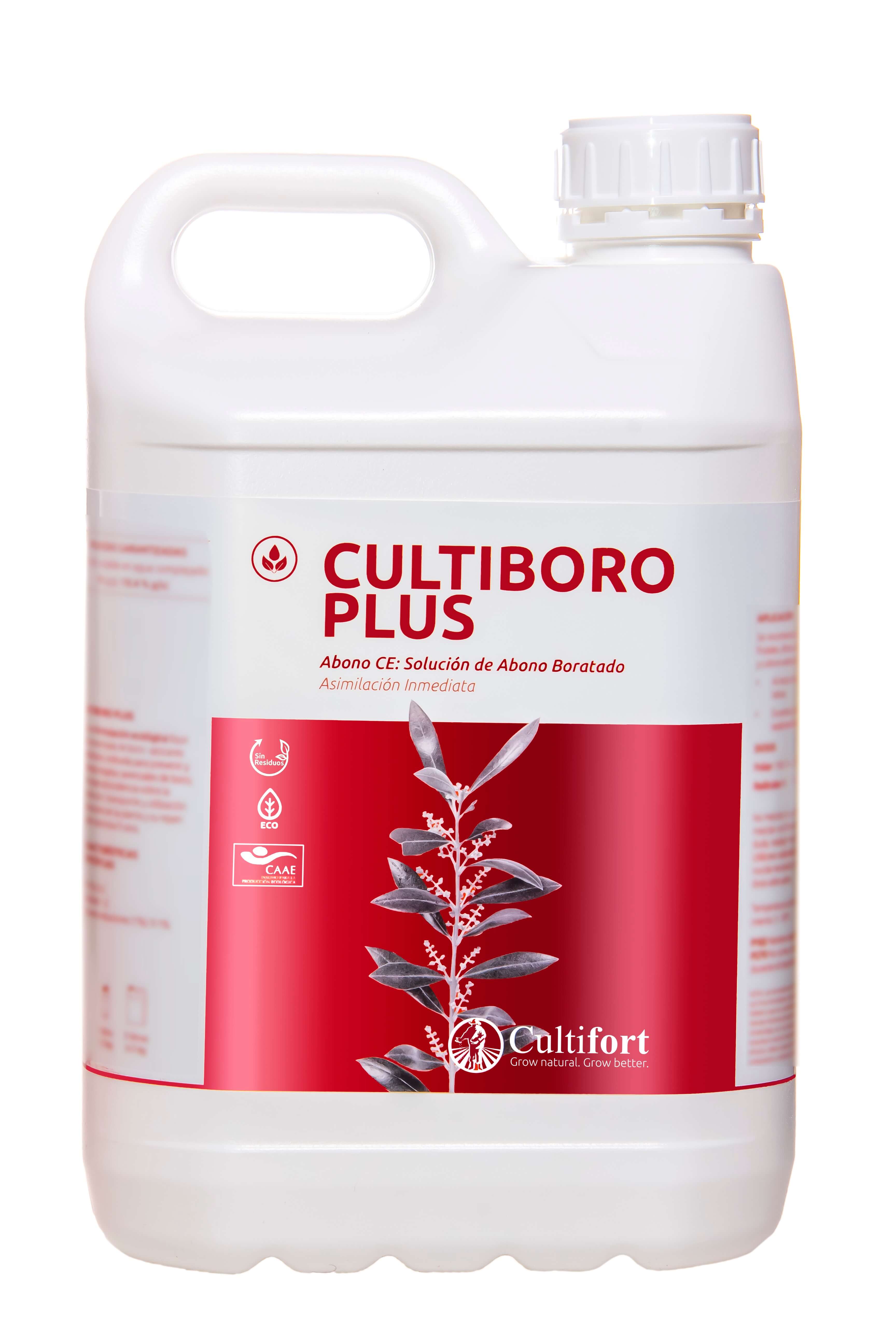 MANZIFORT.  A liquid formula rich in zinc and magnesium chelated with EDTA, polycarboxylic acids, and reducing sugars. Easy application, fast action and efficiency are the main characteristics obtained with this zinc, and magnesium corrector because it’s a lack associated in many cultivations, so controlling them all together is convenient. Zinc acts mainly as an enzymatic activator, highlighting auxin synthesis (indoleacetic acid or growth hormone); while manganese is another enzymatic activator related con carbohydrate metabolism and fatty acids, just like in the formation of nucleic acid and the Krebs cycle, and next to other metals, it acts an activator for arginase and phosphatase, aside from acting in water photolysis in photosynthesis. 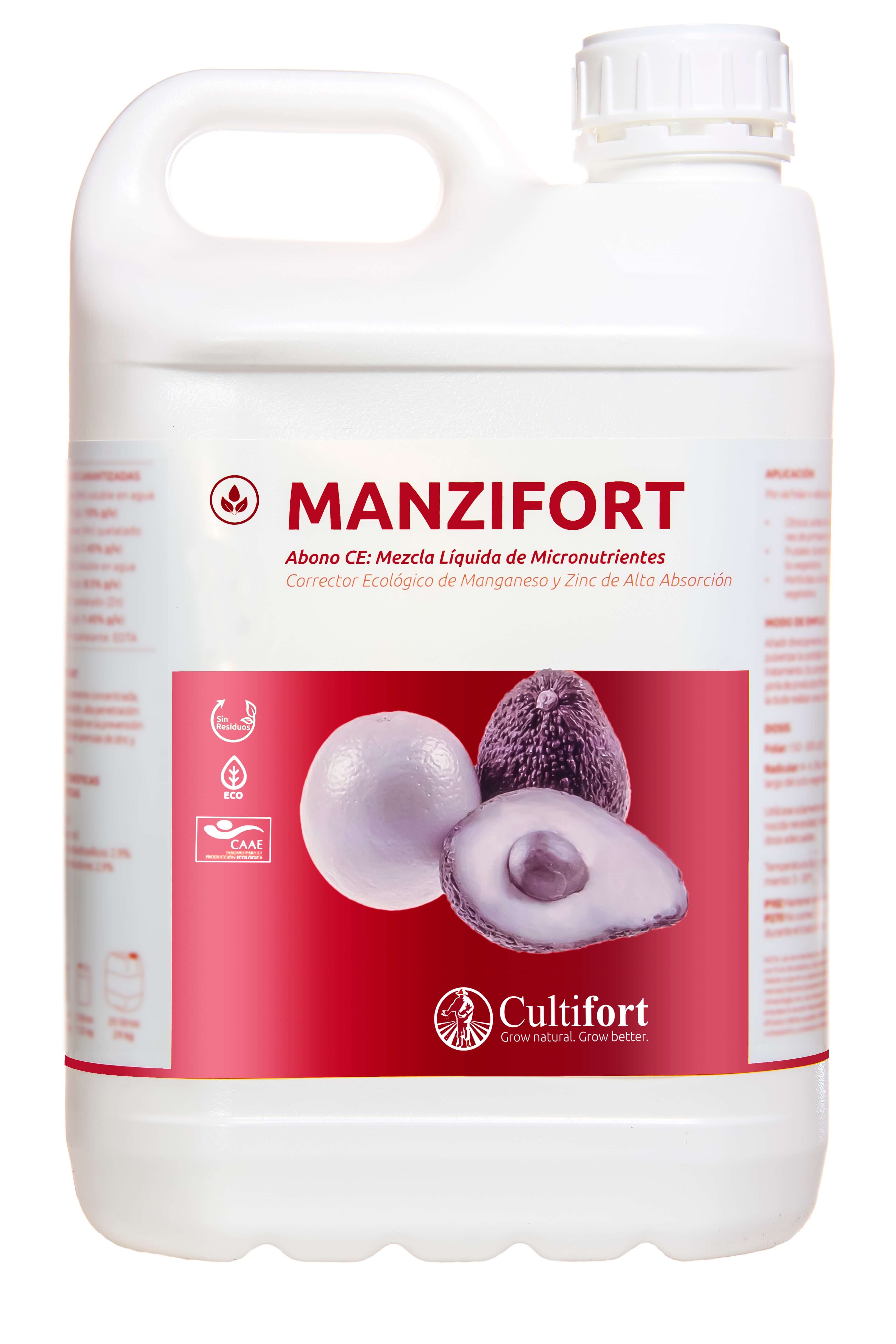 CULTIFORT MIX Micro granules are very soluble in water, very rich in essential microelements, necessary in all stages of the development of the plant, with specific functions that aren’t replaceable by other elements. It’s a special combination of chelator agents confers a high efficiency. It is recommended as a multiple lack corrector. 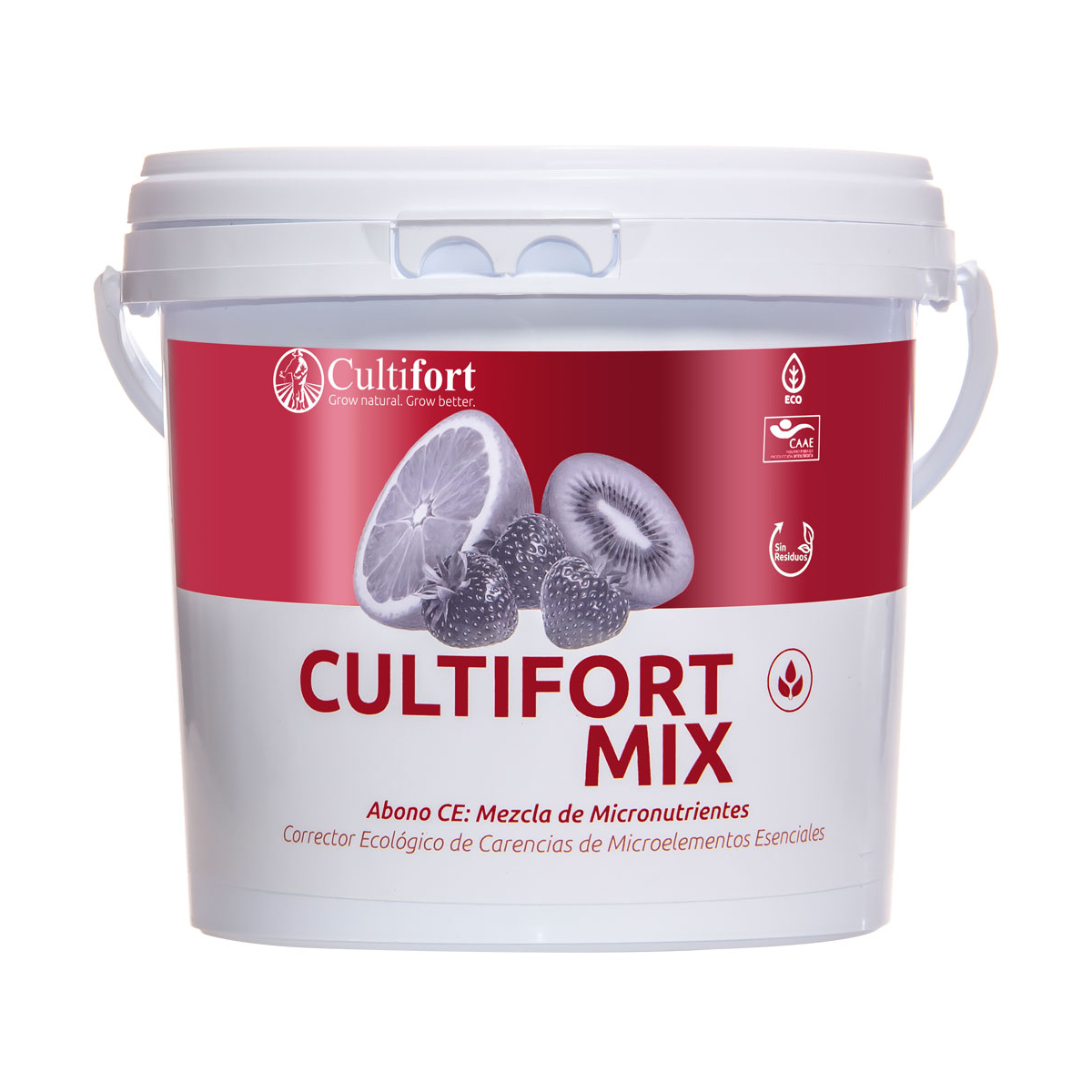 Also adding, all recommended products certified for their use as supplies in ecological agriculture (CAAE).