MICROVITAL-L: 30 years offering the highest quality for crops from the root

MICROVITAL-L: 30 years offering the highest quality for crops from the root

On its thirtieth anniversary, the star product of Cultifort was subject to an examination with the aim of evaluating its three basic functions: Contribution of micronutrients, mobilization and assimilation of macronutrients and improvement of soil structure. The results confirmed the excellence of this product.

MICROVITAL-L is a liquid fertilizer with magnesium, microelements and high concentration in flavonoid molecules, certified by the Andalusian Committee of Organic Agriculture (CAAE) for use in ecologic farming. MICROVITAL-L was obtained after an arduous task of research to offer an innovative product that could be differentiated from those existing in the market based on humic materials.

Micronutrient intake and mobilization of macronutrients.

In mid-May, 20 romaine lettuces were planted in an experimental plot of Cultifort with the aim of carrying out a foliar analysis to evaluate the micro and macronutrient contents after the application of MICROVITAL-L.

Ten lettuces were treated with MICROVITAL-L in 3 applications via root to dose 30 cc / 100 plant, leaving 10 as a control. In addition, all the plants, both control and treated, were subjected to 3 root treatments with FERKOLOR of Cultifort (dose: 100 cc / 100 plants), which provides macronutrients such as Nitrogen (4%), Potassium (11%), Calcium (4%) and the Boron micronutrient (0.2%).

At the end of June, the lettuces were uprooted and sent to an external laboratory where the foliar analysis was carried out. In figures 1 and 2 we can see the increase in macro and micronutrient content of the plants treated with MICROVITAL-L compared to the control.

The results of the foliar analysis confirmed that when MICROVITAL-L is applied, not only are micronutrients added to the plant (Figure 2), but also the macronutrients present in the soil are mobilized, in this case contributed mostly by FERKOLOR, to the effect of the flavonoid molecules contained in MICROVITAL-L, in the germination of spores and root colonization of certain mycorrhizal fungi. In this way, it contributes to a better assimilation of soil nutrients (Figure 1).

Improvement of soil structure and fertility

Together with the Chemistry Department of the Gandia Campus of the Polytechnic University of Valencia, a test was carried out on a citrus plot in order to analyze the effect of MICROVITAL-L on the parameters that influence the structure and soil fertility (table one). A soil sample was taken where MICROVITAL-L had never been applied, which served as a control and another where MICROVITAL-L was applied ten days before sampling.

Table 1. Results of soil analysis of the samples

Infiltration, defined as the process by which water enters the soil through the surface, was measured with a MiniDisk Decagon infiltrometer (Figure 3). With the contribution of MICROVITAL-L, the infiltration rate increased by almost 14%.

In addition, it was possible to reduce 10% of the content in thick elements, allowing a better infiltration and circulation of water and air through the soil.

The organic matter content of the two soil samples was analyzed using the Walkey Black method, obtaining an increase of almost 3%. But we also wanted to quantify this parameter in a floor where MICROVITAL-L has been applied for more than 10 years. In the latter, an increase in organic matter of more than 100% was observed with respect to the control, contributing to a considerable increase in soil fertility and water retention capacity. 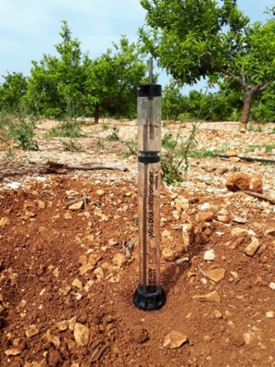