In this kaki campaign, a decline in Spanish kaki production of approximately 40% is estimated due to the past frosts and the strong hail. In this article we provide the recommendations of Cultifort to achieve a balanced nutrition of the fruit, as well as the “shock treatment” to achieve a good recovery of the crop after the hail.

Every year more than 5 million tons of persimmon are produced in the world, being the main producing countries: China, Japan, India, USA and Brazil. In the European market this crop predominates in Italy, Israel and Spain. The Spanish production of this fruit is approximately 350.000 tons per year.

In Spain, the cultivation of kaki has experienced a strong and rapid expansion in the last decade. The plantations of this fruit are present in regions of temperate climate like Catalonia, Andalusia, Murcia and the Valencian Community. In this last region, the crop is mostly concentrated in the Ribera Alta region, where the crop has its own Designation of Origin and variety Rojo Brillante (Bright Red). 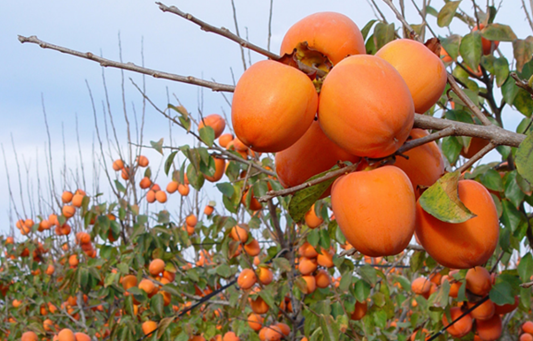 Its expansion arose because of the low profitability that began to have citrus fruits and the spread of the Sharka virus in stone fruit trees.

Spain is one of the main exporting countries of this fruit, being Europe (France, Germany and Portugal) the main market.

The 2018 kaki campaign is marked by a drop in production due to the frosts of February-March, and the hail and wind storm of last July that hit hard in the main growing regions. The Spanish Kaki Association estimates a 40% drop in production compared to the initial forecast of 380.000 tones. However, it foresees that by 2020 the kaki crop will reach values ​​of approximately 600.000 tons.

At this time of the kaki campaign, sources of the commercial department of the Valencian cooperative CANSO, say that the predominant size of khaki is medium, although an increase is expected due to the rains last September. According to the Valencian Association of Farmers (AVA-Asaja) the price in the field of khaki is between 0.35 and 0.45 € / kg.

RECOVERY OF FRUIT AFTER FROST AND HAIL

To achieve a proper recovery of the crop after the hail, from Cultifort we recommend the application of our biostimulant BVC 2021 in combination with the authorized phytosanitary treatments in order to reduce the infections produced by fungi and bacteria that penetrate by the wounds produced in the fruits and in the bark of buds, branches and trunks.

The following foliar treatments, as a complement to the basic fertilizer that should be administered to these fruit trees, will contribute to achieve a balanced nutrition of the crop.

With Cultifort treatments, the caliber undergoes a generalized increase in all measures due to the contribution of nitrogen, organic matter and sugars of BVC 2021 and FERKOLOR. On the one hand, the nitrogen provided by BVC 2021 in the fattening stage gives the plant the raw material to synthesize proteins and cell structures.

Application of Cultifort solutions on kaki

On the other hand, FERKOLOR provides potassium, an essential element for the water control of the plant that allows it to better regulate the flow of water to the fruits, so that it also participates in obtaining a more uniform and larger caliber harvest.

The kaki crop is demanding in manganese, so we recommend the application of MANZIFORT, a liquid formulation rich in zinc and manganese, chelated with EDTA, carboxylic acids and reducing sugars. On the other hand, with CULTIFORT-CALCIO the kaki will achieve a greater hardness and elasticity of the cell wall.

CULTISANO is a liquid formulation of chitosan, a natural polymer from the shell of crustaceans, which exerts a preventive action by inhibiting the growth of mycelium and sporulation of postharvest fungi such as Colletotrichum gloesporoides, Fusarium oxysporum, Rhizopus stolonifer and Penicillum spp.