Flowering and fruit set in fruit trees, citrus and other woody crops

Flowering and fruit set in fruit trees, citrus and other woody crops

Generally, fruit trees need a certain amount of cold hours per year to regulate their vegetative cycle. The accumulation of cold hours begins in the autumn, with the daily reduction of the hours of sunshine and the drop in temperatures. Slowly, our woody species will stop its physiology and metabolism to enter into winter rest, after a period of accumulation of reserve substances that will serve as the basis for the flowering / budding of the next biological cycle. 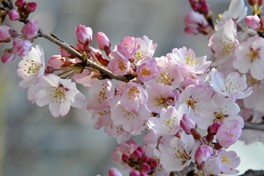 With the exception of some species such as avocado and citrus, which do not need cold to start their biological cycle because they are plants from hot climates, in fact they suffer damage with temperatures that are too low (especially avocado), the cold needs of fruit trees vary depending on the species, even variety. 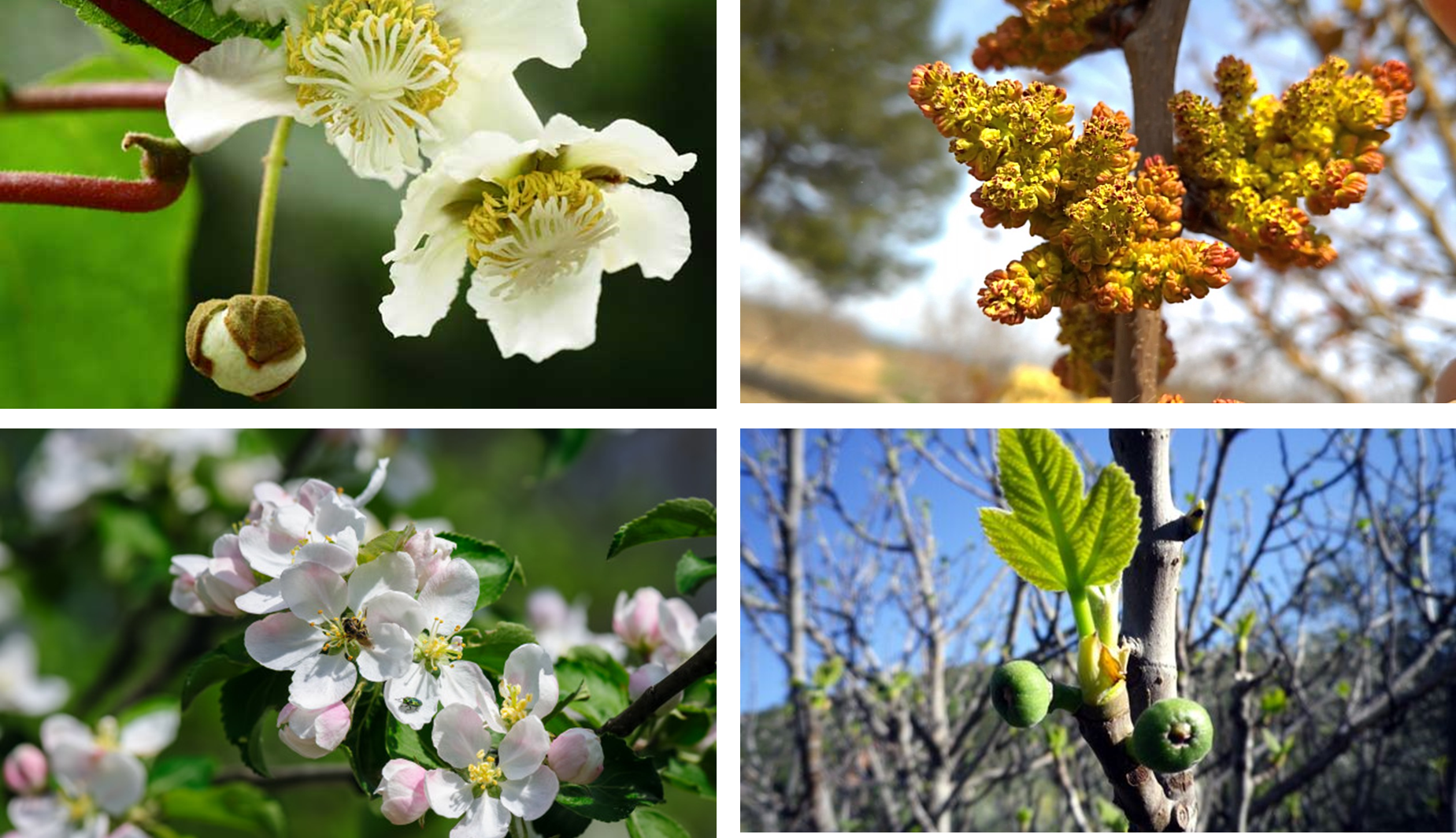 Now, global warming and the foreseeable climate change can modify the behavior of fruit species and, years or areas where enough cold is not accumulated, can cause a scarce or staggered flowering, being able to observe buds in very different phenological states, some can even remain dormant, without sprouting, falling in extreme cases, and therefore not producing flowering.

The processes of flowering, pollination and fruit set are especially important. 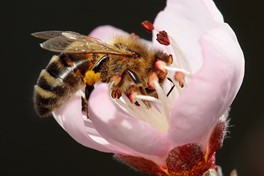 For pollination to take place, the transfer of pollen from the anther of the flower to the stigma of another flower (allogamy) or of the same (autogamy), in the case of hermaphroditic and self-compatible flowers, must occur. This transfer can be done by the wind (anemophilous) or by pollinating insects (entomophilous), depending on the fruit species. Once the pollen grain reaches the receptive stigma of a flower, it must germinate and the pollen tube must travel the path that leads from the stigma to the interior of the embryo sac, where fertilization will take place, giving rise to the future seed. and with it, to the conversion of the flower into fruit.

After pollination, fruit set occurs. The influence of the seeds on the growth of the fruits is regulated by hormones, mainly auxins, gibberellins and cytokinins, whose levels decrease as the seeds mature.

It should be clarified that some fruit species, such as citrus, can develop fruits without the flowers having been previously pollinated and fertilized. This fruiting, known as parthenocarpic, produces fruits that are characterized by the absence of seeds. Parthenocarpic fruits contain auxins and cytokinins in lower concentrations than seed fruits of the same species, and gibberellins are practically absent. They are more susceptible to natural falls and, to

To obtain an adequate level of production, it is essential to keep the plants in optimal nutritional state. In some cases, this parthenocarpy occurs in an induced manner through the application of gibberellins that induce an increase in the endogenous auxin content in the ovary of a non-pollinated flower and also cause fruit growth in the absence of fertilization. 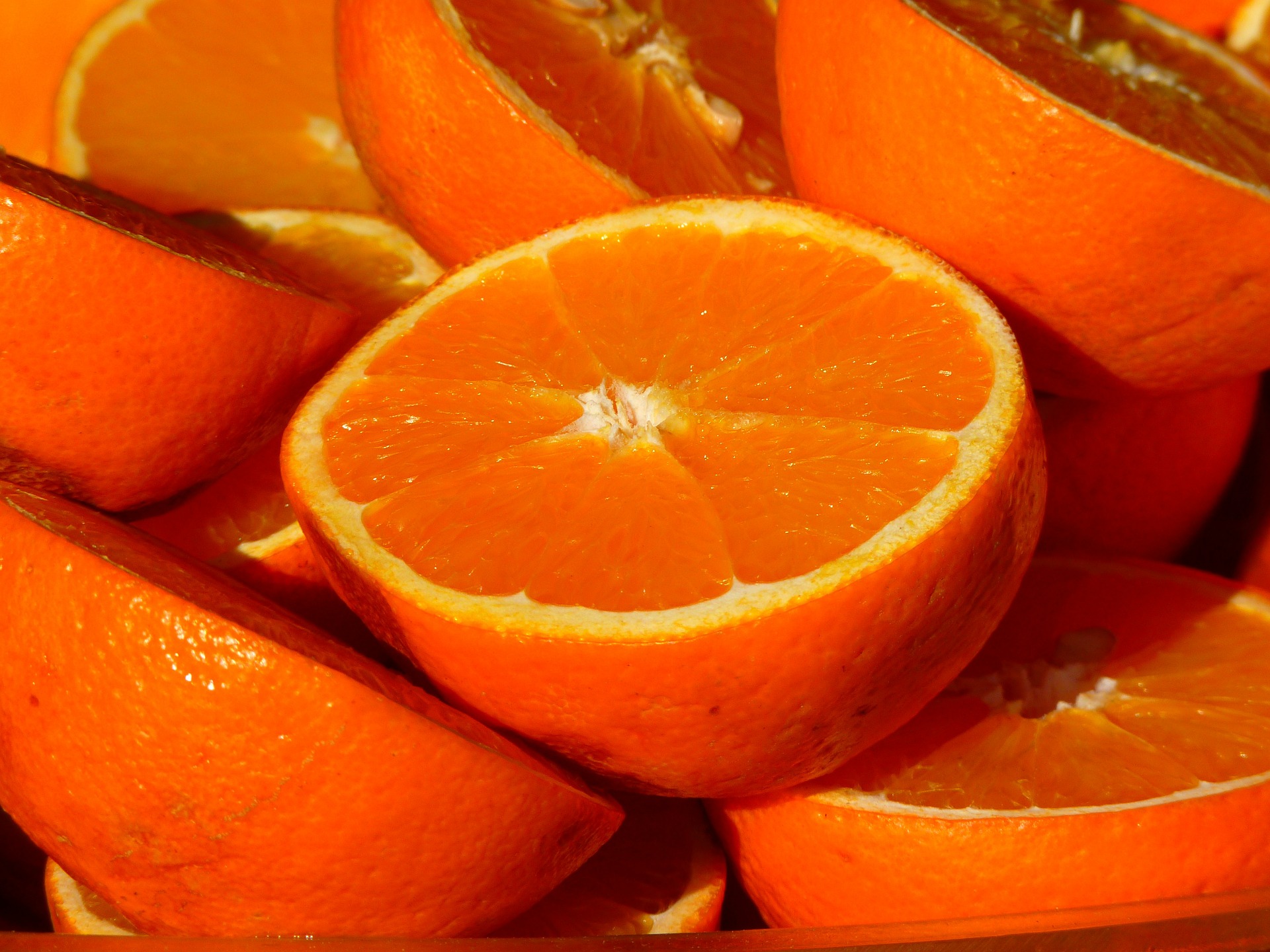 NUTRITIONAL AND SANITARY STATUS OF THE THREE

The nutritional and health status of the tree influences all these processes. The absence of a post-harvest fertilizer plan after the previous season can negatively affect flowering. Not restoring certain nutrients after the productive period of the fruit tree has a direct influence on the accumulation of reserve substances in the different organs of the tree. And it is that these reserve substances will be the only source of supplies during the winter rest of the crop, until once the first vegetative organs have developed, and slowly and gradually, it is photosynthesis that provides the necessary nutrients for normal physiological and metabolic functioning of our fruit species. In general, cultivation techniques that favor the growth and development of flowers or limit competition between them (pruning, sanitary control, early watering, good nutrition, etc.), promote the fruitful capacity of the flowers.

Focusing on the nutritional aspect, the correct application of fertilizers before and during flowering and during fruit setting is essential to maintain an adequate number of fruits per tree.

At the level of macronutrients, nitrogen (its application should be done during post-harvest) plays a fundamental role, increasing the longevity of the ovules and, therefore, increasing the effective pollination period; calcium, on the other hand, positively influences the germination of the pollen grain, so that the more germination occurs normally, the faster the growth of the pollen tube will begin.

Microelements play an essential role in flowering. Among them, and due to their level of consumption, the most important are boron, zinc and manganese. They are related to flowering, fruit setting and the number of fruits, and their insufficiency in the plant causes physiological disorders and reduces the number of fruits per tree.

Boron is essential in the main physiological processes of the plant such as cell division and growth. But, in addition, this micronutrient plays a key role in pollination and fruit set. In these stages, boron increases the viability of pollen grains. It also participates in the transport of sugars, carbohydrates and potassium, in nitrogen metabolism, in the formation of proteins and in the regulation of hormone levels. Symptoms of boron deficiency include inhibition of root growth and development, cessation of cell division in stems and young leaves, short internodes, dry shoots, deformations, and of course, low pollen viability. and abortion and flower drop. Its deficit can have a negative impact on a great variety of crops, causing triple buds in citrus fruits, with small fruits, gum formation and mummified; flower shedding in the vineyard, gradual death at the apical growth points, dry apical branches and meristems in the olive tree, etc.

Zinc is directly involved in the synthesis of some amino acids, although its most relevant function in plants is the activation of numerous enzymes, highlighting the synthesis of auxins. Therefore, it participates in the production of growth regulators responsible for the elongation of the internode and the development of chloroplasts. It is also used by the plant for the formation of chlorophylls and some carbohydrates and improves resistance to low temperatures. Its deficiency significantly reduces growth and productive potential.

Manganese is related to photosynthesis, efficient nitrogen use, protein metabolism, and enzyme activation. It acts on the metabolism of carbohydrates and fatty acids, phosphorylation reactions and formation of nucleic acids (DNA and RNA), in addition to intervening in the photolysis of water in photosynthesis, as well as in the synthesis of sucrose in the plant and in the formation protein. It has an influence on pollen germination processes, pollen tube growth and cell elongation, as well as enhancing the plant’s resistance to biotic stresses. Severe and persistent manganese deficiencies reduce growth and productivity.

At Cultifort we have a wide catalog of deficiency correctors focused on meeting the nutritional needs described for the flowering and fruit setting processes:

Cultifort Calcio is a liquid fertilizer with a high calcium content in the form of lignosulfonate, in combination with organic matter and carbohydrates, which gives it a high penetration power and ease of assimilation by the plant.

Cultiboro Plus is a liquid and ecological formulation of boron complexed with monoethanolamine that contains reducing sugars, forming a complex to improve its assimilation and transport by the plant. In addition, it is chlorine-free.

Manzifort is a liquid formulation rich in zinc and manganese chelated with EDTA, polycarboxylic acids and reducing sugars, being also certified for use in organic farming. Ease of application, speed of action and effectiveness are the main characteristics achieved with this simultaneous zinc and manganese corrector, since they are deficiencies that are usually associated in many crops, being convenient to control them together.

At Cultifort we are also manufacturers of a wide range of biostimulants. The use of biostimulants in agriculture has direct benefits. They serve to better manage extreme situations and achieve crop excellence. They are increasingly valued and used to protect and make production profitable in stressful situations or to help the crop at critical moments in its development.

Fruit trees have other complementary needs that are equally important to those of fertilizers. This is where biostimulants come into play. Its effect has a positive impact on the yield and quality of the harvest, as well as on the “resilience” of the tree subjected to different types of stress, providing the ability to resist and recover from extreme situations. In addition, in certain phenological phases such as flowering, fruit setting, fruit fattening or ripening, plants can have a significant increase in needs. It is, in these states, when it is necessary to act to cover the metabolic requirements with the help of biostimulants.

In the case at hand, flowering and fruit setting, BVC 2021 would be the recommended biostimulant. It is a metabolic activator of the plant even in adverse conditions (temperature, lighting, wind, etc.), based on amino acids and algae in emulsion, also containing nitrogen, potassium and reducing sugars. It increases the rate of photosynthesis, improves the assimilation and translocation of nutrients, increases the synthesis of amino acids, peptides and proteins. It promotes the initiation of the physiological activity of the plant and exerts a multifactorial control in flowering. And now its formula has been improved through CULTITEK Activating Biotechnology, further strengthening its effect on chlorophyll biosynthesis and photosynthetic activity.

And for those deciduous fruit species or fruit trees with flowering problems, Foliquino is our star biostimulant. It is a biostimulant rich in energy that, thanks to its formulation with organic acids, makes it assimilable by leaves, branches or woody parts and by the root system. Its operation is based on the powerful systemic action of aluminum lignosulfonate, whose mobility, both ascending and descending within the plant, helps to balance the aerial part and the root system, improving the sprouting of latent buds and, therefore, achieving a flowering of greater quantity and quality. Certified product for use in organic farming.

BVC 2021‘s association with Foliquino brings a remarkable synergy. It improves the performance of the product as a stimulant and against the problems for which it is indicated.