In 1998, Rafael Sendra, manager of the Cultifort company detected by direct observation in the Pego area, in Alicante, the birth of a new variety that had been born from a spontaneous mutation of the Oronules bud. After monitoring it during several campaigns, it was investigated at the Valencian Institute of Agrarian Research (IVIA) for a decade.

After ten years of research, it was confirmed that, indeed, it was a new variety of early clementine with characteristics that made it unique.

This new variety was patented under the name Cultifort because it was the manager of the Cultifort company who had discovered it and in honor of the company.

The commercialization of the cultifort early clementine began in 2011, obtaining a great reception in the market. It is currently present in many countries and is well established in Spain, Italy and South Africa.

Main characteristics of the variety

The Cultifort Early Clementine is an early variety, and can be harvested between 7 and 15 days before other varieties of mandarins or clementines.

Its characteristics of both the fruit and the tree make it unique and excellent among the existing varieties.


Main characteristics of the tree

The tree of the variety Cultifort Clementine is of good vigor and of rapid entry into production, with open growth and medium size. Its branches do not have thorns and its leaves are similar to the clementine; small, narrow and leathery.

Main characteristics of the fruit 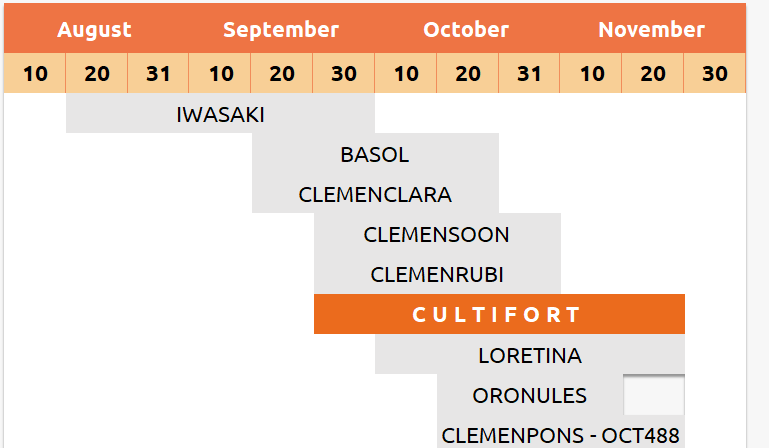 In these links you can find testimonials that talk about the variety of Cultifort Early Clementine:

Expert 1 about the Cultifort Early Clementine

Expert 2 about the Cultifort Early Clementine

Expert 3 about the Cultifort Early Clementine

At Cultifort we have great experience with the handling of the Cultifort Early Clementine variety.

If you have questions about your handling treatment, do not hesitate to contact us and we will give you all the indications and handling recommendations.

How to get it?

Would you like to plant the Cultifort Early Clementine variety? Contact us to obtain the seedling or the plate to carry out the graft.

There is little left to harvest the Cultifort Clementina Precoz