The Citrus Miner (Phyllocnistis citrella) is a parasite that, in its larval phase, lodges under the cuticle of leaves and tender spouts, where it traces a sinuous gallery in its path, while it feeds on the vegetable cells that it drills. to suck their liquid. As a result, the leafs are rolled, dried and broken. If the irruption is very severe the new leaves do not sprout and therefore the citrus sees its photosynthetic capacity limited. 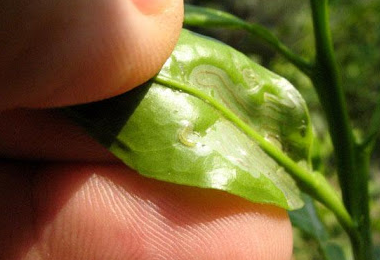 Populations of P. citrella begin to increase at the end of May. Practically all outbreaks are affected by this pest during summer and autumn, with its population decreasing at the entrance of winter. The most serious damages occur in seedlings and grafts.

For the good development of the seedling from Cultifort we recommend the periodic application of the biostimulant BVC 2021 (dose: 100 cc / hl), taking advantage of the treatments against the citrus leafminer. These treatments can be combined with FOLIQUINO (dose: 200 cc / hl) which also provides zinc and manganese.

The vegetal biostimulant BVC 2021 of Cultifort, of foliar application has a fast effect and great penetration, due to the powerful synergy of its composition based on amino acids with nitrogen and an organic combination formed by marine algae, vitamins and reducing sugars, which allow the good recovery for the crop after stress situations.

FOLIQUINO is a product developed by Cultifort with the seal of the CAAE (Ecologic European seal) for its use in organic farming, which prevents the deficiencies of manganese and zinc. Associated with BVC 2021 brings a remarkable synergy; improves the performance of the product as a stimulant and thanks to aluminum lignosulfonate, it induces defenses against fungi and certain types of bacteria.